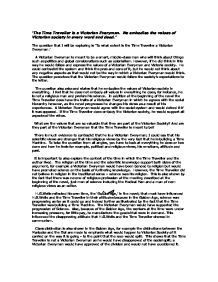 This suggests that he is uncomfortable with all aspects of Victorian social hierarchy. The conflict with the Morlocks develops this theme further and is a physical representation of the fight within the Time Traveller himself. The Time Traveller is questioning all aspects of the society in which he has gown up and from which all of his beliefs are founded. This is a period of serious realisation. Almost a release of what the Time Traveller has suppressed. He has always has the ability to question Victorian society but as an Everyman has chosen not to do so. At this stage in the novel he cannot avoid it any longer. Considering the novel as a whole, the serialisation of the original work impacted the way in which H.G.Wells delivered the story. Because it was serialised each aspect of the novel had to be developed to quite a degree of detail to allow the reader to make immediate sense of it and draw them to the next instalment. H.G.Wells created a sense of urgency through the novel's structure which makes the reader question what will happen next. Looking at the final aspect of the novel where the Time Traveller does not return, I believe that this could be interpreted in many ways. Does it mean that the Time Traveller, as a Victorian Everyman, was following his quest for knowledge or does it mean that he was trying to hide his new-found knowledge and protect others from what he had discovered. Or did he not want to share his knowledge with others and so remain superior. Depending upon which interpretation is taken each has an impact on the representation of the Time Traveller as a Victorian Everyman and reinforces the changing nature of the Time Traveller's development and attitude towards the Victorian Society. The narrative within the novel affects the way the Time Traveller is represented because it provides different perspectives of the same story and supports the structure of the story. ...read more.

This shows that the Time Traveller is not a Victorian Everyman because a Victorian Everyman would never admit his ignorance in anything and, because he realises this in darkness, it shows that he can only think of his ways as wrong when things are at their worst. My last quote shows how the Time Traveller feels in two different societies. 'I fancied I heard the breathing of a crowd of those dreadful little beings around me.' This could show that he is being shepherded along with a crowd that he detests and cannot escape and that they are still closing in. This represents the Time Traveller's confused state of mind; whilst travelling he does not need to conform to a given agenda, he will be judged by no-one. However, should he go back to Victorian times he would lose his freedom and would have to conform. The use of the personification 'breathing of a crowd,' suggests oppression and fear as the people surrounding him are closing in. From my explorations I have gathered enough information to make an argument for both sides of the question 'To what extent is the Time Traveller a Victorian Everyman.' I have looked at the context in arguments such as the science vs. religion. In the narrative/structure I have looked at first person and third person and events of the novel. Also I have looked at the language and how the Time Traveller expresses himself in ordered to fully consider my conclusion. The evidence that I have highlighted considers the struggle that the Time Traveller has had with his own conscience and exploration of his beliefs. In many instances he did represent himself as a Victorian Everyman however, whether he embodies Victorian society in every word and deed has been shown to be untrue. From all of these sections and explorations I have concluded, therefore, that the Time Traveller has no absolute alignment to all Victorian values; he switches from one to another in different situations. I do not believe that he is a Victorian Everyman but equally he does not embody total opposition to the Victorian values. ...read more.