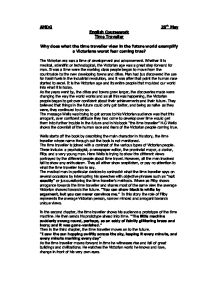 AMDG 28th May English Coursework Time Traveller Why does what the time traveller view in the future world exemplify a Victorians worst fear coming true? The Victorian era was a time of development and advancement. Whether it is medical, scientific or technological, the Victorian age was a great step forward for man. It was a time were the working class people began to move from the countryside to the new developing towns and cities. Man had jus discovered the use for fossil fuels in the industrial revolution, and it was after that point the human race started to excel. It is the Victorian age and its entire people that moulded our world into what it is today. As the years went by, the cities and towns grew larger, the discoveries made were changing the way the world works and as all this was happening, the Victorian people began to get over confident about their achievements and their future. They believed that things in the future could only get better, and being as na�ve as they were, they continued to do so. The message Wells was trying to get across to his Victorian audience was that this arrogant, over confident attitude they had come to develop over time would get them into further trouble in the future and in his book "the time traveller" H.G Wells shows the downfall of the human race and fears of the Victorian people coming true. ...read more.

"There was no hedges, no signs of proprietary rights, no evidence of agriculture; the whole earth had become a garden" This may have seemed strange to the Victorian people as they were at a time when people had started to move the city and mark out their territory, this once again shows the decline of the human nature of ownership. The time traveller then reluctantly comes to the following conclusion: "There were no signs of struggle, neither social nor economical struggle. The shop, the advertisement, traffic, all that commerce which constitutes the body of our world was gone." Here the time traveller comes to this conclusion, confirming a Victorians worst fear of the future world. However, yet again, the time travellers views on the pointless, easy going life of the life forms of earth changes, as he meets the people of the underground, the Morlocks. The time traveller comes to meet the carnivorous Morlocks when he discovers, to his disbelief that the time machine has been stolen. "Can you imagine what I felt as the conviction came home to me? But you cannot. The time machine was gone!" Then, in panic the time traveller began frantically searching for his machine, harming himself as his did so. ...read more.

As darkness fall upon the lifeless uninhabited world, silence spreads across the world, which along with the darkness, persuades to leave, and return to his own time. "Beyond these lifeless sounds the world was silent. Silent? It would be hard to convey the stillness of it." The time traveller final trip into the future portrays everybody's worst fear, the end of the human race. Here the human race has been replaced by crustaceans which have become the dominant species, the results of the decline and eventual extinction of the human race. As the time traveller returns to his own time he is relieved to see normal civilization again. "At last I saw the dim shadows, the evidence of humanity." He then leaves his time machine and tells his audience the shocking event that occurred during his journey though time. Wells shows the Victorians people the possible consequences of their current attitude towards the future. He gives them a warning, that if their arrogant, egotistical attitude persists, it could result in the division of the human race. This in turn will prevent the discoveries and achievements science, technology and social issues. This would disappoint the Victorian people as they believed that the future holds advancements and more achievements, were as Wells is contradicting this, saying that if today's problems are not solved, it will result in the decline and inevitable extinction of the human race. ...read more.