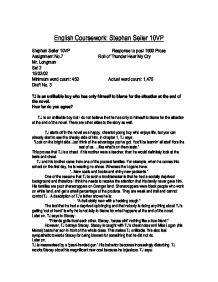 TJ is an unlikable boy who has only himself to blame for the situation at the end of the novel. How far do you agree?

English Coursework: Stephan Seiler 10VP Stephan Seiler 10VP Response to post 1900 Prose Assignment No.7 Roll of Thunder Hear My Cry Mr. Longman Set 2 15/02/02 Minimum word count: 450 Actual word count: 1,475 Draft No. 3 TJ is an unlikable boy who has only himself to blame for the situation at the end of the novel. How far do you agree? T.J is an unlikable boy but I do not believe that he has only to himself to blame for the situation at the end of the novel. There are other sides to the story as well. TJ starts off in the novel as a happy, cheerful young boy who enjoys life, but you can already start to see the cheeky side of him. In chapter 1, TJ says: "Look on the bright side, Jus' think of the advantage you've got. You'll be learnin' all stuff 'fore the rest of us ... like what's on them tests." This proves that TJ is a cheat. If his mother were a teacher, then he would definitely look at the tests and cheat. TJ and his brother came from one of the poorest families. For example, when he comes into school on the first day, he is wearing no shoes. ...read more.

Then he initiates the dismissal of Mary Logan because he has failed the exam. In that time, if anyone fails the end of year exam, then they must redo the year, thus being with the same teacher. He tells Mr. Granger that Miss Logan erased the word 'nigra' on the books. This causes Mr. Granger to sack Miss Logan because she does not abide to the 'white' rules. In chapter 8, Mr. Granger says: "You so smart I expect you'd best just forget about teaching altogether ... then thataway you'll have plenty of time to write your own book" Later on, in chapter 12, Papa sets fire to the land and ruins many of his crops, thus making him poorer in an attempt to save TJ from being lynched. Even though he is working away from home to improve family income. In the 1930s in the South, the Depression came and the black people often had to seek work elsewhere (Papa, for example, manages to hold down insecure work on the railroad during the Depression.) TJ has no scruples, no morals, and will do anything to avoid accepting responsibility. This makes him unlikable. He bullies his brother Claude and he will use any devious method to avoid failing at school. ...read more.

This quotation shows the reader that TJ will get worse if things do not change for TJ. TJ arrives with RW and Melvin (who are both a terrible influence on TJ) and he is dressed like his white friends to impress his ex-friends, the Logans. Cassie realises that the brothers are merely using TJ. She is amazed by TJ's stupidity. But TJ befriending white people shows just how desperate TJ is for attention. He thinks he is getting the attention that his parents and the Logan's stopped giving him, but in reality, the 'white' Simms brothers are just using TJ. TJ says to the Logans: "Everything I want they give me, cause they really like me. I'm their best friend." TJ arrives later, badly hurt and crying with despair. He has been tricked into robbing the Barnett store but RW and Melvin covered their faces and wore gloves. They used TJ as their scapegoat and they could not care less what happens to him. We feel sympathetic towards TJ and this is why TJ is not totally to blame for the end. The Lynch mob then come for TJ, intending to visit the Logans next. The sense of fear and anxiety felt by the Logan children, the stories told around the hearth and the consequences for T.J dominate the novel. The Author, Mildred D. ...read more.