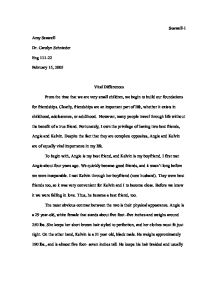 To begin with, Angie is my best friend, and Kelvin is my boyfriend

Seawell-1 Amy Seawell Dr. Carolyn Schnieder Eng 111-22 February 15, 2005 Vital Differences From the time that we are very small children, we begin to build our foundations for friendships. Clearly, friendships are an important part of life, whether it exists in childhood, adolescence, or adulthood. However, many people travel through life without the benefit of a true friend. Fortunately, I own the privilege of having two best friends, Angie and Kelvin. Despite the fact that they are complete opposites, Angie and Kelvin are of equally vital importance in my life. To begin with, Angie is my best friend, and Kelvin is my boyfriend. I first met Angie about four years ago. ...read more.

On the other hand, Kelvin is a 31 year old, black male. He weighs approximately 190 lbs., and is almost five foot- seven inches tall. He keeps his hair braided and usually Seawell-2 doesn't pay much attention to his clothes. T- shirts and baggy jeans seem to be his favorite attire. He may top off his look with a baseball cap or a du-rag. In addition, my beloved friends have very distinct personalities. While Angie is outspoken, Kelvin is reserved. For example, Angie will give you her honest opinion on how an outfit looks, but Kelvin may not tell you he doesn't like it because he doesn't want to hurt your feelings. Angie often intimidates people with her confidence. ...read more.

She lives in a three-bedroom apartment along with her husband and two children (1 son & 1 daughter). Angie frequently spends a lot of time with her family, while Kelvin only sees his daughter and mother on the weekends. The well-defined diversities between Angie and Kelvin bring a tremendous amount to the table. For example, I have the benefit of the female perspectives as well as the male opinion. Moreover, one gets me "fired-up", while the other keeps me grounded. In short, the differences between my best friend and my boyfriend are vital because they balance one another out. Without one or the other, my life wouldn't be the same. I love Seawell-3 them very much, and I couldn't imagine my life without that love being reciprocated. Angie and Kelvin define (to a large degree) who I am as well as whom I want to be. ...read more.