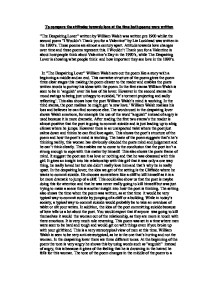 &quot;To compare the attitudes towards love at the time both poems were written

To compare the attitudes towards love at the time both poems were written "The Despairing Lover" written by William Walsh was written pre 1900 whilst the second poem "I Wouldn't Thank you for a Valentine" by Liz Lockhead was written in the 1990's. These poems are almost a century apart. Attitude towards love changes over time and these poems represent this. I Wouldn't Thank you for a Valentine is about how people think about Valentine's Day in the 1990's, while The Despairing Lover is showing what people think and how important they see love in the 1990's. In "The Despairing Lover" William Walsh sets out the poem like a story with a beginning a middle and an end. This narrative structure of the poem gives the poem three clear stages this making the poem clearer to the reader and enables the poets written words to portray his ideas with the poem. In the first stanza William Walsh is seen to be in 'anguish' over his loss of his lover. However in the second stanza his mood swings to being just unhappy to suicidal, "it's torment projecting and sadly reflecting'. This also shows how the poet William Walsh's mind is working. In the third stanza, the poet realizes he might get 'a new love.' William Walsh realises his loss and believes he can find someone else. The words used in the despairing lover shows Walsh emotions, for example the use of the word "anguish" instead of angry is used because it is more dramatic. After reading the first two stanza's the reader is almost positive that the poet is going to commit suicide and is just leading up to a big climax where he jumps. However there is an unexpected twist where the poet just calms down and thinks he can find love again. This shows the poet's structure of the poem and how the poet's mind is working. ...read more.

In addition to the way I feel as the reader the time era it was set in, this type of reaction would be unacceptable for male's to act at this time. Woman were the one's who had usually had the "complicated," "hard time," to get over things. As a reader I think the poem gives an insight into what people thought of love at that certain time. Also I believe it changes the stereotypical view of what a male thinks about love at that time. The main morel of the poem is don't rush into and fall in love hastily as you may end up getting hurt. This is ironic as he the poet is the one who hastily wants to kill himself after his lover has broken up with him. As well their being a main morels there are others as well such love isn't always good and the world doesn't stop spinning, when you get dumped! I would not thank you for a valentine written by Liz Lochead is structured like a list. This suggests to the reader that the poet is recalling memories about Valentines Day from her past, perhaps even bad memories and that is why she is so resentful about Valentines Day. The poet Liz Lochead uses a lot of repetition in the poem. The poems title is repeated a lot which helps the poet get her idea across about valentines day and provides a lot of emphasis. Also she uses repetition to make you believe that valentines day is an hoax. This is ironic as near the end of the poem the poet doesn't think valentines day is an hoax as she wishes she had these gifts, so if she isn't certain then she's got no chance of persuading her reader that valentines day is a fake Another language technique the poet uses is alliteration. She uses words beginning with s, which could symbolise sex, as that is what she feels Valentines Day is about. ...read more.

In both poems I believe they did succeed but not very well and only just. In the despairing lover the poet aim was to tell of the heart ache of the loss of the person he loved and how it nearly driven him to suicide. He got that message however I believe as a reader that he was never was going to kill himself and it was merely a rash decision for a bit of attention. So the reader didn't believe it was very suicidal which was part of his aim. In I wouldn't thank you for a valentine, she did get across her points about how valentines day was a hoax, however I didn't think the poet managing to convince the reader enough to stop buying gifts on valentines day, it made the reader think, but not act. In both poems the poet managed to use good use of language techniques to get their point across. In the despairing lover, the poet uses double meanings of words such as "steep" and "deep." While in I wouldn't thank you for a valentine the poet uses alliteration and repetition. Another comparison between the two poems is we are both hearing the viewpoint from the poet not from anybody else. Both the poems also have a story behind them. I wouldn't thank you for a valentine has a hidden story and that is about something bad happening to her on valentines day. While the despairing lover story is about the poet coping with the break up from his lover. On the other hand their are also many differences between the two poems. There structure is different while the despairing lover is set out like a story with a begging a middle and an end. I wouldn't thank you for a valentine structure is set out like a list. Another difference is that the despairing lover has rhyming couplets while the second poem doesn't. A final difference between the two poems is the both have different opinions on love and what love is like. ...read more.