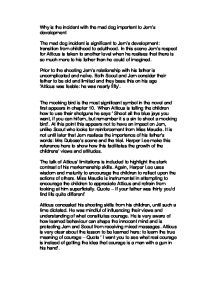 To kill a mocking bird

Why is the incident with the mad dog important to Jem's development The mad dog incident is significant to Jem's development: transition from childhood to adulthood. In this scene Jem's respect for Atticus is taken to another level when he realises that there is so much more to his father than he could of imagined. Prior to the shooting Jem's relationship with his father is uncomplicated and na�ve. Both Scout and Jem consider their father to be old and limited and they base this on his age 'Atticus was feeble: he was nearly fifty'. The mocking bird is the most significant symbol in the novel and first appears in chapter 10. When Atticus is telling the children how to use their shotguns he says ' Shoot all the blue jays you want, if you can hit'em, but remember it s a sin to shoot a mocking bird'. ...read more.

He was mindful of influencing their views and understanding of what constitutes courage. He is very aware of how learned behaviour can shape the innocent mind and is protecting Jem and Scout from receiving mixed messages. Atticus is very clear about the lesson to be learned here: to learn the true meaning of courage - Quote ' I want you to see what real courage is instead of getting the idea that courage is a man with a gun in his hand'. Harper Lee is subtle in exposing Atticus's skills. It is not until Miss Maudie tells Jem ' Forgot to tell you the other day that besides playing the jews harp, Atticus Finch was the deadest shot in Maycome country at this time' Jem is truly stunned and begins to see his father in a different light. ...read more.

Over the course of chapter ten Jem's experiences with Miss Maudie, Calpurnia and Atticus begins to shape Jem's inner development and growth. From chapter 7 to said chapter, Harper Lee has skilfully shown the reader how he is going though the process of discarding youthful assumptions and ideas. Both Jem and Scout have learned something new about their father and their attitudes change towards him. In particular, Jem's growing up process leads him to deal with situations in a mature manner; he admires Atticus's silence regarding his skill with a gun. Jem has developed to self reflect and in doing so has become to realise that as people grow up their views of things change, provided they keep an open and tolerant mind. It is at this point that parallels can be drawn between the characters of Jem and Atticus. Jem's character has played an important part in emphasising one of the main themes in the book: growing up. ...read more.