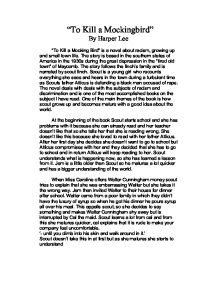 to kill a mocking bird

"To Kill a Mockingbird" By Harper Lee "To Kill a Mocking Bird" is a novel about racism, growing up and small town life. The story is based in the southern states of America in the 1930s during the great depression in the "tired old town" of Maycomb. The story follows the finch's family and is narrated by scout finch. Scout is a young girl who recounts everything she sees and hears in the town during a turbulent time as Scouts father Atticus is defending a black man accused of rape. The novel deals with deals with the subjects of racism and discrimination and is one of the most accomplished books on the subject I have read. One of the main themes of the book is how scout grows up and becomes mature with a good idea about the world. ...read more.

Walter came from a poor family in which they didn't have the luxury of syrup so when he got his dinner he pours syrup all over his meal. This appalls scout; so she decides to say something and makes Walter Cunningham shy away but is interrupted by Cal the maid. Scout learns a lot from cal and from this she matures quicker, cal explains that it is rude to make your company feel uncomfortable. '- until you climb into his skin and walk around in it.' Scout doesn't take this in at first but as she matures she starts to understand Scout hears her classmates saying terrible things about Atticus because he's defending a black man, but she doesn't see the wrong in what her father is doing. ...read more.

On the surface, it is a tale of racial prejudice in the search for justice, but in fact the story goes beyond that. It is about all prejudices, about the importance of walking around in someone else's shoes in order to truly understand them. Atticus Finch is the ideal father and role model for Jem and Scout. Atticus stands for justice, righteousness and for "fighting back" even when you know you have lost. The novel is written from the point of view of Scout when she is older and she often comments on how she didn't understand something at the time, but now, as a grown up, she does She is the only one of the three children to see Boo Radley, and actually talk to him. She learns a lot by "standing in his shoes." She was terrified of Boo, but once she actually saw him, she realized he was harmless. So Scout learns the value of getting to know someone before judging them. ...read more.