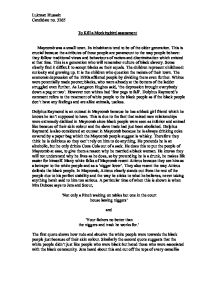 To Kill a Mocking Bird. Atticus is an excellent role model of a good citizen because he is not racist especially at a time when the white people are superior and have the power to discriminate.

To Kill a Mockingbird assessment Maycomb was a small town. Its inhabitants tend to be of the older generation. This is crucial because the attributes of these people are paramount to the way people behave: they follow traditional views and behaviours of racism and discrimination which existed at that time. This is a generation who will remember culture of black slavery. Some clearly find it difficult to accept blacks as their equals. The children represent childhood: curiosity and growing up. It is the children who question the racism of their town. The economic depression of the 1930s affected people by dividing them even further. Whites were potentially made poorer; blacks, who were already at the bottom of the ladder struggled even further. As Langston Hughes said, 'the depression brought everybody down a peg or two'. However non whites had 'few pegs to fall'. Dolphus Raymond's comment refers to the treatment of white people to the black people as if the black people don't have any feelings and are alike animals, useless. Dolphus Raymond is an outcast in Maycomb because he has a black girl friend which he knows he isn't supposed to have. This is due to the fact that mixed race relationships were extremely disliked in Maycomb since black people were seen as inferior and animal like because of their skin colour and the slave trade had just been abolished. ...read more.

vastly prepared and thought on the harsh realities of the world that when the men come, scout shames them and Atticus says, 'So it took an eight-year-old child to bring 'em to their senses.... That proves something - that a gang of wild animals can be stopped, simply because they're still human. Hmp, maybe we need a police force of children.' This quote shows that Lee is saying that just because you are different because of your size, skin colour, etc. It doesn't mean you are superior. This phrase is said by a child therefore it shows how ignorant some adults were, never thinking justly before taking action. Atticus shows himself as a good citizen to the neighbours by respecting them even though people like Miss Dubose hates him and calls him trash. Atticus and Dolphus Raymond clearly think of and respect others fairly due to the fact that they both do of what they think is right and stick to it, rather than just doing what others do. Tom Robinson is a tough customer especially to the white community because he does not step down and goes for the extreme limit. In the court case Tom says he felt sorry for the lady and that is why he helped her, 'Looks like she didn't have nobody to help her. I felt right sorry for her.' ...read more.

During the trial the white and black people come and see the jury in the court house. The black people take the trial very seriously because this also affects them and are there to support Tom Robinson. On the other hand the white people come into the court all dressed up with their babies as if they've come into a circus, gossiping because they have not gone to the court to support someone however they have simply gone to have a nice day out. While all of this is going on Scout and Jem are in between the black and white people because firstly they are white and are respected for that and secondly their father is defending a black suspect so the blacks also respect them. In this novel Harper Lee's message about this period in history is showing us how vial discrimination towards the black people was in those periods of time even though slavery had been abolished decades ago. I think the most vital message Harper Lee is showing is that even though if a black person was clearly innocent he/she would still be punished either put behind bars or most likely put to a death sentence. Harper Lee shows what an important weapon education was in 1930's because without it you were doomed. Through the character of Atticus, Harper Lee uses the mockingbird motif throughout the book to symbolize the innocence of various victims of injustice. ?? ?? ?? ?? Lukman Hussain Candidate no. 3265 ...read more.