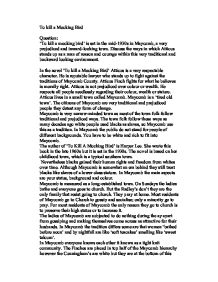 'To kill a mocking bird' is set in the mid-1930s in Maycomb, a very prejudiced and inward-looking town. Discuss the ways in which Atticus stands up as a man of reason and courage within this very traditional and backward looking environment.

To kill a Mocking Bird Question: 'To kill a mocking bird' is set in the mid-1930s in Maycomb, a very prejudiced and inward-looking town. Discuss the ways in which Atticus stands up as a man of reason and courage within this very traditional and backward looking environment. In the novel 'To kill a Mocking Bird' Atticus is a very respectable character. He is reputable lawyer who stands up to fight against the traditions of Maycomb County. Atticus Finch fights for what he believes is morally right. Atticus is not prejudiced over colour or wealth. He respects all people needlessly regarding their colour, wealth or stature. Atticus lives in a small town called Maycomb. Maycomb is a 'tired old town'. The citizens of Maycomb are very traditional and prejudiced people they detest any form of change. Maycomb is very narrow-minded town as most of the town folk follow traditional and prejudiced ways. The town folk follow these ways as many decades ago white people used blacks as slaves, so Maycomb use this as a tradition. In Maycomb the public do not stand for people of different backgrounds. You have to be white and rich to fit into Maycomb. ...read more.

Aunt Alexandra refers to the Cunningham's as not 'our kind of folks'. She believes that a high rank family like the Finches' shouldn't mix with low class people such as the Cunningham's. A. Alexandra has her share of secrets to hide though. She hides well the fact that cousin Joshua 'went round the bend in University' and 'tried to shoot the president'. Alexandra believes that Scout and Jem should learn the importance of 'the family and what it's meant to Maycomb County through the years. A. Alexandra tries to teach her nephew and niece about the family name and how background certifies you a better rank in Maycomb. Atticus and A. Alexandra have different opinions on people. Aunt Alexandra chooses her friends through their class and upbringing whereas Atticus chooses his friends through loyalty and truthfulness. Racism is a strong factor in Maycomb. The white nation treat the black nation like trash although they do not understand that the blacks are equal to themselves. Blacks traditionally were segregated from whites; this tradition still is in existence in Maycomb County. Violence is a main factor the whites express their hatred of blacks. This is shown when the lynch mob go down to the jailhouse to try and to kill Tom Robinson. ...read more.

Miss Maudie is an example of one of these people. She believes that "we're paying the highest tribute we can pay a man'. Atticus strongly regards his views that all men are equal should be broadened although he lost the case he still thinks he has a chance at making people in Maycomb change their old-fashioned ways. To conclude this essay I must say that I believe that Atticus is a strong willed person who wants to make his point made clear. Atticus teaches his children moral attitudes to life. He brings out the prejudice attitudes, which need to change. A quote that I will never forget and always cherish is that 'you never really understand a person until you climb into his skin and walk around'. This little piece of advice is almost the best piece of advice you could ever give someone. From Atticuss' viewpoint he has shown that Maycomb is very backward. He has shown that there are people who differ from the vast majority of others. Atticus has shown us that Maycomb will need a lot of different tactics to try and change the prejudice and traditional ways. Atticus has taught me that people can change their ways if they want to. Atticus mean 'philosopher' I think it is a suitable and rather good name to describe the personality of Atticus. By Halimah H Chattun ...read more.