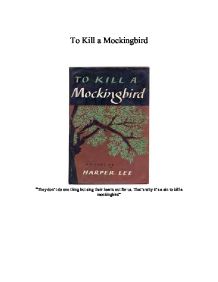 To Kill a Mockingbird.

To Kill a Mockingbird "They don't do one thing but sing their hearts out for us. That's why it's a sin to kill a mockingbird" "You never really understand a person until you consider things from his point of view...until you climb into his skin and walk around in it" Harper Lee , the author and winner of the Pulitzer Prize for the novel "To kill a mocking bird". Harper Lee was born in 1926 in Monroeville, in the south west of Alabama. She is the youngest of four children of Amasa Coleman Lee and Frances Finch Lee. Harper Lee attended Huntingdon College 1944-45, studied law at University of Alabama 1945-49, and studied one year at Oxford University. Her fathers occupation was law. This relates to "To kill a mocking bird" since scout's father, Atticus Finch, was also a lawyer. It creates an effect of a fictional autobiography because it contains elements of fiction and autobiography. She was the youngest in her family this is also part of putting elements of her life into a book. The book was written in 1957 and published in 1961. This was at the time of the Martin Luther King and Malcolm X movement who were fighting for racial equality. The novel has no fixed genre, this is what makes it such an interesting and refreshing novel, since it keeps changing it's genre. In the 1930's the state of Alabama, racism was still present in large numbers. There was a segregation between blacks and whites. Black people had to go to black schools, to black churches, and live in certain areas. This all relates to the American civil war. A war between the Northern Union and the Southern Confederacy. ...read more.

One can see that black people didn't get education because of segregation in the chapter when Jem and Scout go to Calpurnia's chuch."Cal, I whispered, where are the hymn-books? 'we don't have any" This shows that the black community did not receive reasonable education. Before the Tom Robinson case started when Atticus wanted to defend Tom Robinson him and his children where called "nigger-lover", this shows a sign of racism in the community, also what mrs. Dubose said to Jem "What has this come to when a Finch goes against his raising" This statement implies that even if slavery was abolished, people where still taught that white's would be superior, this is an act of racism. Aunt Alexandra was also a sterotype in the Maycomb community. According to Scout "Aunt Alexandra fitted into the world of Maycomb like a hand into a glove". This shows that her stereotype behaviour and gossiping habbits remained. But Alexandra is not nice towards Calpurnia "Put my bag in the front bedroom Calpurnia" Alexandra was ordering Calpurnia around like a slave when she is actually a servant. The Finches are a white middle class society. Scout's father is a lawyer, a respectable high profiled job. His brother Jack Finch studied medicine, as we can see the Finch family have middle-class income occupations. Aunt Alexandra is obsessed with teaching the Finch children about their superior backround "Being southerners, it was a source of shame to some members of the family that we had no recorded ancestors on either side of the Battle of Hastings." This supports the idea that Alexandra wanted to prevent shame from being upon her family which makes her partially racist. ...read more.

It shows that to understand a person or how he feels one needs to see things from their perspective. One way how Harper Lee challenges sterotypes is in the relationship of blacks and white by comparing the Ewells residence with the blacks residence. At the Ewells it is raw place, it is behind the city garbage dump, which tells us that ironically they are white trash. "the Ewells gave the dump a thorough gleaning everyday" this shows that the Ewells where so poor and miserably low in life that they lived behind a dump, and searched the garbage thoroughly to scavenge some items that might be of use. Now to compare it to the blacks residence" In the frosty December dusk, their cabins looked neat and snug with pale blue smoke rising from the fires inside." This shows that the black people where more civilized, a person would think that Bob Ewell would be more civilized that the black community but Harper Lee changed it the other way around to challenge prejudice. The book has relevance to our modern society today, because we can all learn from the book of justice and equal opportunities, if we follow Atticus's symbol. There is still racism present yet not as much as there used to be. There where fights and struggles for justice, mainly from the Martin Luther King and Malcolm X movement who fought for racial equality in America. Stereotypes are intolerant and are unfair towards other people, this causes prejudism which then leads to in-justice. Harper Lee's message is still applicable today, if we teach the over all message of Atticus's maxim to the next generations we could reduce prejudice actions from taking place. ...read more.