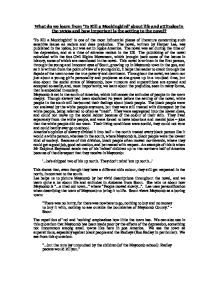 What do we learn from 'To Kill a Mockingbird' about life and attitudes in the 1930s and how important is the setting to the novel? 'To Kill a Mockingbird' is one of the most influential pieces of literature concerning such sensitive issues as racism and class prejudice. The novel, written by Harper Lee, was published in the 1960s, but was set in 1930s America. The novel was set during the time of the depression, and at a time of extreme racism in the US. The publishing of the novel coincided with the 60s Civil Rights Movement, which brought back some of the issues in history, some of which are mentioned in the novel. This novel is written in the first person, through the young and innocent eyes of Scout, growing up in Maycomb town in the 30s, and as it is written from the point of view of a young child, it helps the reader to crack through the fa�ade of the town to see the true poverty and detriment. Throughout the novel, we learn not just about a young girl's personality and problems as she grows up in a troubled time, but also about the social strata of Maycomb, how rumours and superstitions are spread and accepted so easily, and, most importantly, we learn about the prejudice, seen in many forms, that is embedded in society. Maycomb is set in the south of America, which influences the attitudes of people in the town deeply. Though slavery had been abolished 70 years before the setting of the novel, white people in the south still harboured their feelings about black people. The black people were not enslaved by the white people anymore, but they were still treated with disrespect by the white people, being referred to often as "trash". They were segregated into the lowest class, and could not move up the social ladder because of the colour of their skin. ...read more.

The day that old Tim Johnson, the rabid dog, comes down the street toward the Radley house, everyone is concerned about his or her safety, especially Calpurnia. She rushes to the Radley front door to warn them of the dog coming their way: "We watched Calpurnia running towards the Radley place...She went up to the front steps and banged on the door...'She's supposed to go round the back.'" During this time in 1930s deep south America, the front door of the houses of white people was only to be used by white people; black people were not important enough to use the front door, so they were forced to only use the back door. Scout questions Calpurnia's use of the front door, even in the severe situation that they are in. Rumours usually do spread quickly in small towns like Maycomb, but in Maycomb they spread like wildfire. Hardly any rumour is doubted, and rumours about black people are never doubted. The divisions between the white and the black communities are one of the most important themes throughout the novel. If a crime is committed in Maycomb and one of the suspects present is black, the one who is black is always the guilty one, whether he actually committed the crime or not. As well as racism, another theme running through the course of the novel is sexism. One of the main sexist attitudes is when Aunt Alexandra demands that Scout wear dresses instead of trousers: "[Aunt Alexandra said] I could not possibly hope to be a lady if I wore breeches; when I said I could do nothing in a dress, she said I wasn't supposed to be doing things that required pants." This opinion is very stereotypical of girls and women at that time. Aunt Alexandra wants Scout to dress like a girl and not do activities that needed trousers because she wants Scout to be trim and proper - something very conventional at the time. ...read more.

One of the main plots in the novel is when Atticus, Scout and Jem's father, has a court case defending the black man Tom Robinson, who is accused of raping a white woman named Mayella Ewell. It is also a peak of racism and illustrates Maycomb in its true prejudiced ways. The Ewell family is one of the lowest classes - but not as low as the black people, so even they could look down at the black community the way that most of Maycomb did. Atticus summarises the tension between the white community and the black community in the case in a simple statement: "The case is as simple as black and white." This statement shows the court that the decision that Tom Robinson is innocent should be a simple and easy choice - but in doing this it would be choosing black over white - something unthinkable in this time in Maycomb (and generally the whole of the south of America). This is representative not only of Alabama at the time, but of the racial hatred continuing through generations from centuries before. Even before the trial has started, Tom has to be kept in high security, for fear of racial unrest occurring. In the eyes of every white person in town, Tom is guilty ever since Bob Ewell accused him of raping his daughter. Atticus fights hard for the case, and though all the evidence points towards Tom's innocence, he was still proven guilty - but not because of the case. He was guilty of being black. This shows that the setting of the novel, both in place and time, is vital to exemplify the deep line of hatred, prejudice and racism running through what appears at first glance to be an innocent, safe community. Through the eyes of Scout growing up in a deeply divided society, the reader can see through the proud exterior to the real sin and evil, disguised in the forms of prejudice and racism that changed the world. ?? ?? ?? ?? ...read more.