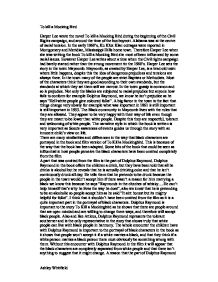 To kill a Mocking Bird Harper Lee wrote the novel To kill a Mocking Bird during the beginning of the Civil Rights campaign, and around the time of the bus boycott. Alabama was at the centre of racial tension. In the early 1960's, Ku Klux Klan outrages were reported in Montgomery and Meridian, Mississippi Dills home town. Therefore Harper Lee when she was writing the book To kill a Mocking Bird she most of been influenced by some racial issues. However Harper Lee writes about a time when the Civil rights campaign had barely started rather than the strong movement tin the 1960's. Harper Lee sets the story in the town Maycomb. Maycomb, as created by Harper Lee, is a tired old town where little happens, despite this the idea of dangerous prejudices and tensions are always there. In the town many of the people are strict Baptists or Methodists. Most of the characters think they are good according to their own standards, but the standards at which they set them self are narrow. In the town gossip is common and so is prejudice. Not only the blacks are subjected to racial prejudice but anyone how fails to conform for example Dolphus Raymond, we know he isn't prejudice as he says "Hell white people give coloured folks". ...read more.

We know that Cal has a life away from the finches as she adopts her other kind of speech, "She asked in tones I had never heard her use. She spoke quietly, contemptuously." We know that Cal is really important to the family as atticus says "Cal is the backbone of this family" As well we learn that their church, something that is very special and holy to them is used as a casino in the week by the white community. This sums up the black community in the story and just shows how much respect that the whites have for the blacks. Despite there church being used as a casino, the black people are quite happy with the arrangement and therefore this visit is very important in portraying the black characters as it shows us that they have a lot of respect and tolerance for white people we know this as it says "Negro's worshipped it". Without this part in the film the black community will not be portrayed as being so mistreated and still gracious about it. This part was most probably taken out of the film either because Calpurnia doesn't have a big enough role in the film or because the producer didn't want the black people to come across being as mistreated as they are in the book. ...read more.

Scouts narration has a very influential role in the film as it guides us as the viewer through nearly every event and therefore influences the way that we perceive the events that occur, for example scout says "He had an appeasing way." This instantly influences the audience to believe that this character is a good character that we can trust. The most important production technique used to make the film To Kill a Mockingbird is the idea to shoot the film in black and white. This is a good idea as it shows us that blacks are still very separate from whites. And that they live in two different worlds. In conclusion I think that the film version of Harper Lee's To Kill a Mockingbird portrayal of the black characters is slightly different to that of the original. But in most cases the reason for it is because of the time limit or racial issues and because it's a film having some bits in like Tom Robinson getting shot 17 times would be a little to controversial, especially due to the time at which the film was released as when it was released racial issues were very sensitive and I expect that a lot of scenes were cut because of it. But overall even though the portrayal of black characters is a bit different from the book the film still gets the same message across. Ashley Whitfield ...read more.