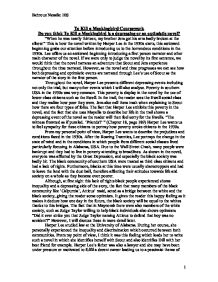 To Kill a Mockingbird Coursework Do you think To Kill a Mockingbird is a depressing or an optimistic novel? "When he was nearly thirteen, my brother Jem got his arm badly broken at the elbow." This is how the novel written by Harper Lee in the 1930s starts, this awkward beginning grabs our attention before introducing us to the horrendous conditions in the 1930s. Lee offers us an awkward beginning introducing a first person narrator and other main character of the novel. If we were only to judge the novel by its first sentence, we would think that the novel narrates an adventure that Scout and Jem experience throughout the time narrated. However, as the novel and time progresses we can see how both depressing and optimistic events are narrated through Lee's use of Scout as the narrator of the story in the first person. Throughout the novel, Harper Lee presents different depressing events including not only the trial, but many other events which I will also analyse. Poverty in southern USA in the 1930s was very common. This poverty is display in the novel by the use of lower class citizens such as the Ewell. In the trail, the reader sees the Ewell social class and they realize how poor they were. Jem also call them trash when explaining to Scout how there are four types of folks. The fact that Harper Lee exhibits this poverty in the novel, and the fact that she uses Mayella to describe her life in the trail shows a depressing event of the novel as the reader will then feel sorry for the Ewells. "The witness frowned as if puzzled. 'Friends?' " (Chapter 18, page 189) Harper Lee wants us to feel sympathy for these citizens to portray how poverty stroke citizens in the 1930s. From my personal point of view, Harper Lee wants to describe the prejudices and conditions faced in the 1930s. ...read more.

As the novel progresses, we encounter many different deaths taking place in Maycomb. One of the first deaths Scout informs the reader about her mother death. The fact that both Scout and Jem now have no mother gives the reader a depressing sensation. "Our mother died when I was two, so I never felt her absence." (Chapter 1, page 12) This short sentence is used by Lee to impact critically on the reader's feelings making it feel sorry for both Scout and Jem and also adding to the novel another depressing aspect. As Scout is the narrator of the novel, she is unable to express her feelings about her mother's death as she does not remember her and she only has memories Atticus told her about. However, Lee does sometimes describes what Jem thinks about it, which gives the reader a sad feeling. "I did not miss her, but I think Jem did." (Chapter 1, page 12) Mrs. Dubose is another character who is present in the story but dies later. Mrs. Dubose was not very popular in the neighbourhood as she used to shout and insult people within the neighbourhood by shouting things like "you father's no better than the niggers and trash he works for" (Chapter 11, page 108). Mrs Henry Lafayette Dubose, is used by Harper Lee to represent the typical Maycomb society, she also represents the norms and values and of a typical lady. As Mrs Dubose is an old lady, we can understand her racist view as when she was younger black people were slaves. However, the fact that she still treats black people as slave makes the novel depressing. She is also a lonely character that decided to give Jem a harsh punishment just because she needed some distraction. "According to her views, she died beholden to nothing and nobody. She was the bravest person I ever knew." ...read more.

The theme of prejudice is also a very big theme that can be even decomposed into many other smaller themes including racial prejudice and individual prejudice. The use of the theme of prejudice mostly described depressing points about how many people were segregated by the evil society in Maycomb at this time. Another theme used by Lee is the theme of courage. Courage is a theme which portrays how many member of the white society disagreed with the norm and values of the typical society as they thought that everyone should be treated equal. This theme therefore evidences us with mostly optimism as it makes the reader feel the desire many citizen had of having a fair society. A last theme used by Lee is the theme of symbolism which is about using the title of the novel as a metaphoric meaning. The symbolism of the word mockingbird brings a depressing feeling to the reader as it shows how many harmless people had been killed by society like Boo Radley or Tom Robinson for example. As I read the novel, I experienced both optimistic and depressing feeling depending on the tone, the language and the content. From my point of view, I think that the first chapters of the book narrate mostly optimistic events as it shows how the children learn the difference between what is good and bad. I think that the trial narrates the most depressing events in the novel but could be also considered optimistic as once the trial was finished many members of the white society realized how black people should be treated equally to whites. As a conclusion, from my own experience when reading the novel I think that the novel itself is depressing. However, I could consider the novel optimistic in a long-term way as it gives the reader the feeling that in the future everything will different as black and white will have the same rights. ?? ?? ?? ?? Behrouz Nezafat 10S 1 ...read more.