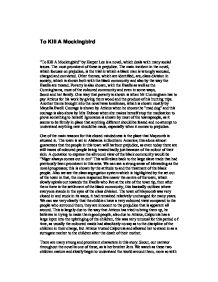 To Kill A Mockingbird "To Kill A Mockingbird" by Harper Lee is a novel, which deals with many social issues. The most prominent of these is prejudice. The main incident in the novel, which focuses on prejudice, is the trial in which a black man is wrongly accused, charged and convicted. Other themes, which are identified, are, class division in society, which is shown both with the black community and also by the way the Ewells are treated. Poverty is also shown, with the Ewells as well as the Cunninghams, most of the coloured community and even in some ways, Scout and her family. One way that poverty is shown is when Mr Cunningham has to pay Atticus for his work by giving them wood and the produce of his hunting trips. Another theme brought into the novel was loneliness, which is shown mostly by Mayella Ewell. Courage is shown by Atticus when he shoots the "mad dog" and this courage is also show by Mrs Dubose when she makes herself stop the medication to prove something to herself. ...read more.

We can see very clearly that the children have a very coloured view compared to the people who surround them, they are innocent to the prejudice that is apparent all around. This is largely due to the way that Atticus has tried to bring them up, he believes in trying to make them good people, also due to Atticus, Calpurnia has a large input into the upbringing of the children, this was very unusual for this period of time, as usually the coloured maids had absolutely no say as to the discipline of the children in their charge, but Atticus trusted Calpurnia and allowed her to stand in as a surrogate mother to the children after the death of their mother. There are many strong and prominent characters in this story. Scout, our narrator throughout the novel is one of these, as is her brother Jem. We watch as these two children mature and slowly begin to understand the world around them, more so with Jem, we begin to see great maturity, he also begins ...read more.

Yet another less obvious mockingbird is Mrs Dubose, who battles with her addiction to prove something to herself, this makes it difficult for those around her to understand her, and most of the town either fears or dislikes her. There is a very effective narrative technique used I think that the initial statement of prejudice being a main theme throughout has been proved. We have seen that if something is different and so not understood people use this as an excuse to alienate and cause hurt. This as we can see has been done on a large scale with the coloured people but also on a smaller scale with the Ewells and Boo Radely. The theme of prejudice is basically what the whole novel is based around. It deals with it in many different forms, with the most prominent being Racism, which is shown to a great extent by the treatment of Tom Robinson. ...read more.