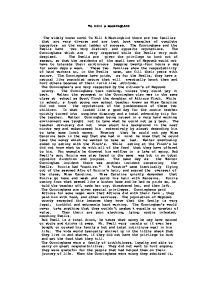 To kill a mockingbird.

To kill a mockingbird The widely known novel To Kill A Mockingbird there are two families that are very diverse and are text book examples of complete opposites on the moral ladder of success. The Cunninghams and the Ewells have two very distinct and opposite reputations. The Cunninghams which are very respected while the Ewells very much despised. The Ewells are given the privilege to hunt out of season, so that the residents of the small town of Maycomb would not have to tolerate their continuous begging twenty-four hours a day for seven days a week. These two families show the respectability of hard workers or, in the Ewells case, can fill their peers with sorrow. The Cunninghams have pride, as for the Ewells, they have a natural like anarchist nature that will eventually haunt them and hurt others because of their lurid like attitude. The Cunningham's are very respected by the citizen's of Maycomb county. ...read more.

Miss Caroline quickly demanded that Burris go home and wash and scrub his hair with Kerosine. Burris coming from what seemed like a broken home and he had no pride so, he told the teacher off, made her cry, threatened her, and then left. The Cunninghams are given special privileges. Cunninghams paid Atticus for some legal work that Atticus did with their farm, they paid him with food, and other services. The population of Maycomb county excepted this because they know that the family is very loyal, truthful and extremely hard working. The Cunningham's would never take anything that they couldn't payback equally or greater of value. Then their are your slacking, lying, cootie infested, mooching Ewells. Bob Ewell is a total drunk, he takes what money he may have earned or stole and drinks it away. Mr. Ewell very rarely or if ever has bought or cooked his family a hot and total nutritious meal in his life. ...read more.

The Cunninghams renewed their resources by doing this, people were glad to help them. As for the Ewells used up their resources, they scrounged around taking, taking, and taking from others and used up their resources. People were disgusted when they helped the Ewells. Both Cunninghams and Ewells had special privileges Cunninghams were able to pay people back with other things than just the American currency, while the Ewells were given privileges because people were ashamed of them. Cunninghams also never had to worry about getting themselves into trouble they never lied and were very hard workers, the Ewells were liars, and were too ashamed to stop the slandering of Tom Robinson before it came uncontrollable, costing Tom his life. This story shows that Hard work is difficult and tough to maintain, but it will pay off, it maybe easier to beg and mooch like the Ewells but sooner or later the beggars and moochers have no where to turn, so they lie and cheat and quickly their life become corrupt, much like the Ewell's. ?? ?? ?? ?? ...read more.