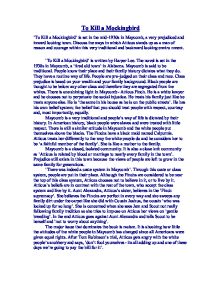 To Kill a Mockingbird 'To Kill a Mockingbird' is set in the mid-1930s in Maycomb, a very prejudiced and inward looking town. Discuss the ways in which Atticus stands up as a man of reason and courage within this very traditional and backward looking environment. 'To Kill a Mockingbird' is written by Harper Lee. The novel is set in the 1930s in Maycomb, a 'tired old town' in Alabama. Maycomb is said to be traditional. People know their place and their family history dictates what they do. They have a routine way of life. People are pre-judged on their class and race. Class prejudice is based on your wealth and your family background. Black people are thought to be below any other class and therefore they are segregated from the whites. There is one shining light in Maycomb- Atticus Finch. He is a white lawyer and he chooses not to perpetuate the social injustice. He treats his family just like he treats anyone else. He is 'the same in his house as he is on the public streets'. He has his own belief system; the belief that you should treat people with respect, courtesy and, most importantly, equally. ...read more.

The town is totally opposed with the 'mixing of race'. Mr Dolphus Raymond is a white man and he is married to a black woman and has mixed children. He is no longer accepted in society and is treated with disdain by the white community. Tom Robinson's trial highlights the town's problem with racism. Tom is referred to as a 'nigger' and in such terms that he is thought of as an animal, not a human being. Tom was found guilty of raping Mayella Ewell when the case against him clearly lacked any proof that he had done it. This case should never of come to trial and the only reason he was found guilty was because he was black. Atticus agrees with this as he says 'this case is a simple as black and white'. When speaking in his address to the jury, Atticus says 'She (Mayella) was white, and she tempted a Negro. She did something that in our society is unspeakable: she kissed a black man'. He appealed to the jury that they should not judge Tom Robinson under the assumption 'that all Negroes lie, that all Negroes are basically immoral beings, that all Negro men are not to be trusted around our women'. ...read more.

He knew he wasn't going to win the case but he wanted people to take 'baby steps' towards enlightenment. He is a highly respected gentleman who has equal respect for others. Miss Maudie has a lot of respect for Atticus. She says 'Atticus Finch is the same in his house as he is on the public streets'. He believes that 'there is one way in this country in which all men are created equal'- in a court. He believes in justice but to his disgust he discovers that tradition is not always broken, as Tom got a guilty verdict. Atticus could do nothing to stop Tom going to prison, and this is his 'profound distaste for the practice of criminal law'. Atticus Finch stands out as a shining light in a backward looking town. He shows great strength and courage by standing up for his beliefs in a town were prejudice has existed for generations. He has helped the town take 'baby-steps' towards a better society in which everyone is equal. He is a respected gentleman who tries to fight Maycomb's racist views using peaceful means. He stands up as a man of reason in a town were people are pre-judged on their wealth, class and race. He is a man of reason, courage and dignity and he is a great example to us all. BY CHETAN PATEL ...read more.