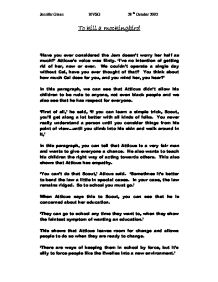 To kill a mockingbird.

To kill a mockingbird 'Have you ever considered the Jem doesn't worry her half as much?' Atticus's voice was flinty. 'I've no intention of getting rid of her, now or ever. We couldn't operate a single day without Cal, have you ever thought of that? You think about how much Cal does for you, and you mind her, you hear?' In this paragraph, we can see that Atticus didn't allow his children to be rude to anyone, not even black people and we also see that he has respect for everyone. 'First of all,' he said, 'if you can learn a simple trick, Scout, you'll get along a lot better with all kinds of folks. You never really understand a person until you consider things from his point of view...until you climb into his skin and walk around in it,' In this paragraph, you can tell that Atticus is a very fair man and wants to give everyone a chance. ...read more.

You must obey the law.' Atticus teaches his children to do right and to follow the law. 'Its against the law all right...and it's certainly bad, but when a man spends his relief cheques on green whisky his children have a way of crying from hunger pains. I don't know of any landowner around here who begrudges those children any game their father can hit.' Even though some things may be against the law, Atticus will allow them if it's going to keep people alive and help the survive. 'Of course he shouldn't, but he'll never change his ways. Are you going to take out your disapprovals on his children?' Atticus teaches Scout not to take things out on the wrong people. 'Does this by any chance have anything to do with the Radleys?' 'I'm going to tell something and tell you one time: stop tormenting that man. That goes for the other two of you.' ...read more.

No matter what anybody says to you, don't you let 'em get your goat. Try fighting with your head for a change...it's a good one, even if it does resist learning.' Atticus tells Scout that she shouldn't care about what other people think about her Father defending a negro and that fighting won't solve anything. 'Simply because we were licked a hundred years before we started is no reason for us not to try to win.' This shows that Atticus has a very good attitude to winning. Even if he knows he will loose, he will still try his hardest to do his best. 'I'd rather you shoot at tins in the back yard, but I know you'll go after birds. Shoot all the bluejays you want, if you can hit 'em, but remember it's a sin to kill a mocking bird.' Atticus doesn't like his children harming living things and wants them to respect everything. Jennifer Green 10VSG 28th October 2002 ...read more.