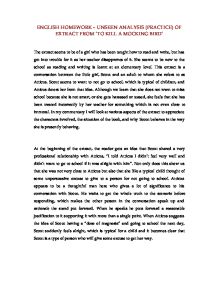 To kill a mockingbird

ENGLISH HOMEWORK - UNSEEN ANALYSIS (PRACTICE) OF EXTRACT FROM 'TO KILL A MOCKING BIRD' The extract seems to be of a girl who has been taught how to read and write, but has got into trouble for it as her teacher disapproves of it. She seems to be new to the school as reading and writing is learnt at an elementary level. This extract is a conversation between the little girl, Scout and an adult to whom she refers to as Atticus. Scout seems to want to not go to school, which is typical of children, and Atticus deters her from that idea. Although we learn that she does not want to miss school because she is not smart, or she gets harassed or teased, she feels that she has been treated incorrectly by her teacher for something which is not even close to immoral. In my commentary I will look at various aspects of the extract to appreciate the characters involved, the situation of the book, and why Scout behaves in the way she is presently behaving. ...read more.

We realize that Atticus is a man who does not only think about himself, but takes time to think about the situation other must be in before he reacts to any situation. Even in this extract he asks Scout what the problem really was so that he could think about it and give a fair and just decision. He tells scout his philosophical idea so that she realizes her teacher's objective in saying that Atticus taught her all the wrong stuff and the other misfortunes she faced in school. Although after Atticus's immensely strong line, Scout seemed to have realized that Miss Caroline, her teacher made a sincere mistake as she did not know all of Maycomb's ways in a day, Scout however still seems to be hung on to the idea of not going to school as she comes up with another idea of them not doing anything unlawful but yet her missing school just like a person known as Burris Ewell. ...read more.

They agreed upon this compromise. Atticus also realized that Miss Caroline had a problem against him teaching Scout and did not want Scout to suffer because of that, hence he told Scout not to discuss their conciliation as he had a feeling their activities "would be received with considerable disapprobation by the more learned authorities". He also did not want to get on Miss Caroline's wrong side as he did not want her after him. Throughout this extract Atticus has shown himself to be a calm gentle human being, who wants to understand both sides of the situation and finally tackle the problem at its root before it builds up, where as Scout comes across as a stubborn person who wants things her way and gets upset by little things which disturb her. Both of them seem to share a relationship of professional understanding which comes from past experiences. Atticus looks for more viable solution while Scout typical of a child looks for radical solutions but finally agrees with Atticus's ideas. ...read more.