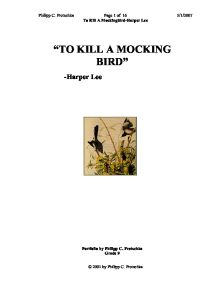 "TO KILL A MOCKING BIRD" -Harper Lee Portfolio by Philipp C. Protschka Grade 9 Table of Contents 1.) Why the book is called "To Kill A Mockingbird"? 2.) Compare and contrast the book and the film. 3.) "To Kill A Mockingbird" takes readers to the roots of human behaviour -to innocence and experience kindness and cruelty. Love and hatred, humour and pathos." What is your view? 4.) "Shoot all the blue jays you want, if you can hit 'em, but remember it's a sin to kill a mockingbird." Place this extract in context and discuss which characters in the book you consider to be blue jays and which characters you consider to be mockingbirds. 5.) Discuss Harper Lee's presentation of the theme of family life in To Kill A Mockingbird. You should concentrate on the Radley, Harris and Ewell families in your discussion. 6.) Discuss, using examples from the book, how Atticus raises his children. What does he teach them and what lessons do they learn in the process? 7.) Compare and contrast the characters of Scout and Jem. 8.) Write a letter from Mrs Merriweather to J. Grimes Everett. In it, ask him about his work and praise him and encourage him. The main purpose of the letter is to tell him of Tom Robinson's trial and any events (especially the reaction of the Negroes) which take place afterwards. Bear in mind that Mrs Merriweather holds strong opinions about everything and will not hesitate to pass judgement on all that has occurred. 9.) The great works of literature are equally relevant to each generation. Use examples taken from To Kill A Mockingbird to explain your response to this statement. 1.) Why is the book called To Kill A Mockingbird? I think to understand this title you first have to read the book just the title doesn't tell you anything about the book. ...read more.

He knew what he was doing; he knew he was going to blame Tom for the beating and rape of Mayella even though he knew that if did not happen (the rape). Bob Ewell is a blue jay, for costing a man his freedom...and his life. Blue jay 3: Mayella Ewell is at the center of the whole case, she is the key to Tom's guilt of innocent. If she would have had the guts to come forward and confess the lie that brought down an innocent man, the case would have been dismissed. She wanted him so badly because she had no one. She thought she loved him, but love was in a lower position to her urges, she wanted him to love her. She is a blue jay of planning the whole event that in the end would take a man's life. 5.) Discuss Harper Lee's presentation of the theme of family life in To Kill A Mockingbird. You should concentrate on the Radley and Ewell families in your discussion. The Cunningham's were just as poor as the Ewells, yet they dealt with their poverty in a different manner. They did not suck money from the state through welfare as the Ewells did, and paid for what they could. They would not take handouts. An example of this is when Walter Cunningham was offered lunch money by his teacher. He wouldn't take it because he knew he would never be able to repay it. Poverty reduced the Ewells to an animalistic style of life, where fathers rape their own daughters. The Ewells also never attended school, aside from the first day, whereas the Cunningham's were faithfully attending school. In addition, the Cunningham's remained honourable despite their situation, while the Ewells didn't. The Cunningham's and the Ewells are two examples of how different people deal with the same situation of poverty. 6.) Discuss, using examples from the book, how Atticus raises his children. ...read more.

But the jury said Tom Robinson is guilty. Tom was then killed after an unsuccessful try to escape of the prison. My opinion was that Tom Robinson was definitely not guilty after the evidences of Atticus. After this all was over Atticus's popularity was so high, by the black people of the town, that many of them gave Atticus food at the next morning. With these presents they want to say:" Thank you that you are defending us instead of attacking us" 9.) The great works of literature are equally relevant to each generation. Use examples taken from To Kill A Mockingbird to explain your response to this statement. Great Works of literature will always be important to each generation and every person otherwise they wouldn't be called great works of literature. Everyone can learn of great works of literature. What I learned of this novel is that racism and prejudices is a very cruel thing. I also think great works of literature are relevant to each generation not equally relevant but relevant. From this book we can learn how prejudices can affect some innocent individuals. E.g. Tom Robinson's death can be referred to some individuals in the novel who all accused him of raping Mayella because they learned, as they were growing up, "White peoples words are truer than the word of a Negro" Atticus the model father of the book was a great example of how parents should educate and teach their children. Atticus always set a good example even he was provoked by Bob Ewell. Atticus looked over the opinions of others and defended a black man in front of the trial. At this time it was not a good thing to defend a black man in front of the judge. Atticus just ignored the people who talked behind his back. In this novel it easy to see who are the mockingbirds and who are the blue jays so my opinion is that everybody can learn different from this novel. Philipp C. Protschka Page 1 of 16 5/1/2007 To Kill A Mockingbird-Harper Lee (c) 2001 by Philipp C. Protschka ...read more.