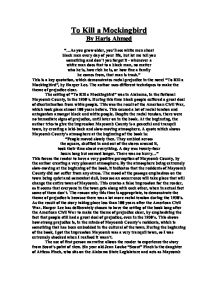 To Kill a Mockingbird By Haris Ahmed "...As you grow older, you'll see white men cheat black men every day of your life, but let me tell you something and don't you forget it - whenever a white man does that to a black man, no matter who he is, how rich he is, or how fine a family he comes from, that man is trash." This is a key quotation, which demonstrates racial prejudice in the novel "To Kill a Mockingbird", by Harper Lee. The author uses different techniques to make the theme of prejudice clear. The setting of "To Kill a Mockingbird" was in Alabama, in the fictional Maycomb County, in the 1930's. During this time black people suffered a great deal of discrimination from white people. This was the result of the American Civil War, which took place almost 100 years before. This caused a lot of racial tension and antagonism amongst black and white people. Despite the racial tension, there were no immediate signs of prejudice, until later on in the book. At the beginning, the author tries to give the impression Maycomb County is a peaceful and tranquil town, by creating a laid-back and slow-moving atmosphere. A quote which shows Maycomb County's atmosphere at the beginning of the book is: "People moved slowly then. They ambled across the square, shuffled in and out of the stores around it, took their time about everything. A day was twenty-four hours long but seemed longer. There was no hurry..." This forces the reader to have a very positive perception of Maycomb County, by the author creating a very pleasant atmosphere. ...read more.

He suffers enormously due to the stereotypes that society has had for years towards black people, which becomes more apparent towards the end of the trial when he is finally accused of being guilty of raping Mayella Ewell. All these aspects of his character make the theme of prejudice clear, by him displaying acceptance towards all types of people, and strong views against prejudice. "The witnesses for the state...have presented themselves to you gentlemen, to this court, in the cynical confidence that their testimony would not be doubted, confident that you gentlemen would go along with them on the assumption - the evil assumption - that all negroes lie, that all are basically immoral beings, that all negro men are not to be trusted around women, an assumption one associates with minds of their calibre. Which, gentlemen, we know is in itself a lie as black Tom Robinson's skin... You know the truth, the truth is this: some Negroes lie, some Negroes are immoral, some Negro men cannot be trusted around women, black or white. But this is a truth that applies to the human race and to no particular race of men...In the name of God, do your duty." Harper Lee also uses Atticus to make the theme of prejudice clear, in the courtroom. The quote shows that Atticus tries to appeal to the jury's sense of dignity, and in putting together the facts of the case; he stresses the simplicity of the evidence, which show that the facts point towards Tom Robinson's innocence. It later becomes apparent that he doesn't really believe that the jury will set Tom free; even though he does hope they will, ...read more.

An example of this is when Calpurnia varies her speech, depending on whether she is around black or white people: "They's my comp'ny" This quotation shows that Calpurnia uses informal language when in the presence of black people, whereas around white people, she uses much more formal language: "Nowhere. Let's see now, who taught me my letters?" This is effective in showing that black people are expected to speak in an inferior manner, and white people are expected to use formal dialect. This successfully indicates prejudice on both sides, as they don't want to change. Prior to Calpurnia talking in an informal manner, I had only experienced her talking properly, in the presence of the children, before the incident at the church. When I eventually discovered the truth, I was as surprised as the children to see her talking in an unfamiliar way, as it was not expected of her. Calpurnia uses formal language, when in the presence of white people, to show respect towards them. She also does this to show that black people are in fact quite intelligent and are certainly not the derogative stereotype that the white people perceive the black people to be; as they think they are an inferior race. Overall, I think that Harper Lee's novel was extremely effective, by making me a lot more aware of prejudice, which happens in the world. I even learned about prejudices that I never knew existed before reading the book. In my opinion, the technique of symbolism was most effective, since it brought out the good in people, in an overwhelmingly prejudice place. The author has successfully shown me that a lot of prejudice existed in the world during the 1930's and probably still exists in the minds of many people today. ...read more.