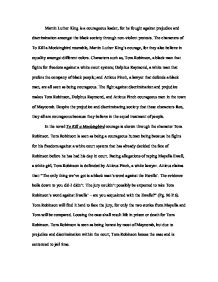 Martin Luther King is a courageous leader, for he fought against prejudice and discrimination amongst the black society through non-violent protests. The characters of To Kill a Mockingbird resemble, Martin Luther King's courage, for they also believe in equality amongst different colors. Characters such as, Tom Robinson, a black man that fights for freedom against a white court system; Dolphus Raymond, a white man that prefers the company of black people; and Atticus Finch, a lawyer that defends a black man, are all seen as being courageous. The fight against discrimination and prejudice makes Tom Robinson, Dolphus Raymond, and Atticus Finch courageous men in the town of Maycomb. Despite the prejudice and discriminating society that these characters face, they all are courageous because they believe in the equal treatment of people. In the novel To Kill a Mockingbird courage is shown through the character Tom Robinson. Tom Robinson is seen as being a courageous human being because he fights for his freedom against a white court system that has already decided the fate of Robinson before he has had his day in court. ...read more.

Dolphus Raymond quotes: "Cry about the hell white people gives colored folks without even stopping to think they're people too" (Pg.213 P.5). One may assume through the quote that Dolphus Raymond identifies with black people, for they are mistreated. Dolphus believes that by showing the true side of black people, this may change the perception of them within the town of Maycomb. Although Dolphus Raymond fears the rumors against him, this still does not stop him on setting a goal of equality. Therefore, one may see Dolphus Raymond as being courageous because he stands for what he believes in. Another character who shows exceptional courage in Harper Lee's novel, Two Kill a Mockingbird, is lawyer Atticus Finch. Atticus Finch is courageous for agreeing to defend a black man falsely accused of having raped a white woman. Atticus does his best to defend Tom Robinson, even though he knows that he has no chance of winning the case. Although Atticus will loose, he still feels that "Simply because we were licked a hundred years before we started is no reason for us not to try to win" (p. ...read more.

Although many characters in the novel show courage, Atticus raises above all the rest to show the many different facets of bravery. The ongoing struggle for equality amongst the black and white communities makes Dolphus Raymond, Tom Robinson, and Atticus Finch courageous men, amongst the narrow minded people of Maycomb. These characters from the novel To Kill a Mockingbird resemble Martin Luther King, for they fought non-violently against prejudice and discrimination amongst the black community. Men like Tom Robinson, a black man who fought against a white court system to win his freedom against rape charges; Dolphus Raymond, a wealthy white man that prefers the company of black people; and Atticus Finch, a lawyer in the town of Maycomb that defends a black man are all seen as courageous people. Society discriminated and insulted them for their beliefs. Although these men were discriminated against, they never wavered from believing in what was right. They fought for racial equality without the use of violence. In the town of Maycomb, these courageous men following the example of Martin Luther King fought for what they believed in without resorting to violence. A feat of courage not easy to accomplish. ...read more.