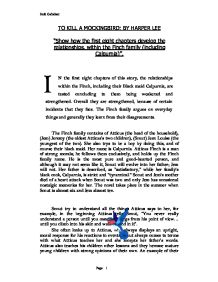 To Kill a Mockingbird: By Harper Lee

TO KILL A MOCKINGBIRD: BY HARPER LEE "Show how the first eight chapters develop the relationships, within the Finch family (including Calpurnia)". I N the first eight chapters of this story, the relationships within the Finch, including their Black maid Calpurnia, are tested concluding to them being weakened and strengthened. Overall they are strengthened, because of certain incidents that they face. The Finch family argues on everyday things and generally they learn from their disagreements. The Finch family contains of Atticus (the head of the household), (Jem) Jeremy (the oldest Atticus's two children), (Scout) Jean Louise (the youngest of the two). She also trys to be a boy by doing this, and of course their black maid. Her name is Calpurnia. Atticus Finch is a man of strong morals; he follows them exclusively, and holds up the Finch family name. He is the most pure and good-hearted person, and although it may not seem like it, Scout will evolve into her father; Jem will not. ...read more.

Atticus looks at everyone and tries to understand who they are and where they are coming from. And he quietly and subtly passes on wisdom to his children about subjects like racism. Calpurnia, is the Finch families, black maid and has quite an impact on the family. She has a positive female influence on Scout in the absence of her mother. Calpurnia teaches Scout many of the same lessons. Since Atticus sees Calpurnia as a member of the family, she is allowed to freely scold and lecture Scout if need be. Calpurnia teaches Scout about treating people with respect and taking time to understand others. Scout watched Cal and even sees that being a girl isn't such a bad thing. Cal, despite being black and the Finch's cook, becomes a kind of mother to Scout in many ways. Cal can be strong minded towards Scout using violence to make her listen, as Scout is very strong-headed. For example when Walter Cunningham comes for supper, Scout talks her mind; "He would probably have poured it in to his milk glass had I not asked what the sam hill he was doing. ...read more.

Scout is not nearly as mellow as Atticus, though. She can be very outspoken and isn't afraid to challenge others whenever she sees fit, sometimes with her fists. Scout sees her brother more as a friend than a sibling because of how they have grown up, with nothing else but each other to play with. She prefers to play the role of being more of a masculine figure rather than being feminine, and that is where Calpurnia helps out immensely in this department because she plays the role of their mother. Scout doesn't have many memories of her mother, and therefore is not as affected by her absence, unlike Jem. In the first eight chapters of this story, the Finch family share disagreements, but they also learn from them in detail. Scout remembers, what he father tells her, and its stays with her, in other incidents. Jem is similar he learns from his sister as well as Atticus. On a whole, the Finch family becomes closer as the story goes on and they learn from their mistakes. ? In the town Maycomb Ruth Gallafant Page 1 ...read more.