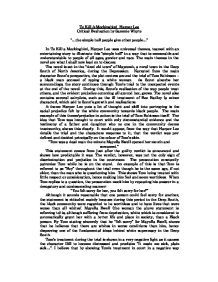 To Kill A Mockingbird by Harper Lee - Critical Evaluation.

To Kill A Mockingbird Harper Lee Critical Evaluation by Sammie Whyte "...the simple hell people give other people..." In To Kill a Mockingbird, Harper Lee uses universal themes, teamed with an entertaining story to illustrate this "simple hell" in a way that is memorable and understandable to people of all ages, gender and race. The main themes in the novel are what I shall now lead on to discuss. The novel is set in the "tired old town" of Maycomb, a rural town in the Deep South of North America, during the Depression. Narrated from the main character Scout's perspective, the plot centres around the trial of Tom Robinson - a black man accused of raping a white woman. As Scout absorbs her surroundings, the story continues through Tom's trial to the unexpected events at the end of the novel. During this, Scout's realisation of the way people treat others, and the evident prejudice occurring all around her, grows. The novel also contains several sub-plots, such as the ill treatment of Boo Radley (a minor character), which add to Scout's growth and realisations. ...read more.

Mayella Ewell (the woman the above statement is referring to) is, although suffering from deprivation, white which is considered to automatically grant her with a better life and place in society, than a Black person. By Tom stating sincerely that he "felt sorry" for Mayella Ewell, shows that he believes that there are whites in worse conditions than him, hence disproving one of the fundamental ideas behind white supremacy in the Deep South. Tom's treatment during the trial is shown in a very negative light as it causes the character Dill to become distressed and proclaim "It made me sick, plain sick...". I believe that by showing Tom's treatment in court in a negative way Harper Lee is trying to highlight that there is no justification for racial prejudice, especially in the courtroom. Another main theme in To Kill a Mockingbird is sexism. Harper Lee uses the female inhabitants of Maycomb to portray the stifling sexist attitude of the Deep South. Comments like "ther's no lady safe in her bed these nights", show the restrictive attitude that women should be fragile and delicate, hence needing the constant protection from their strong male counterparts. ...read more.

However, because of the communities distorted views they are prosecuted - not protected. I believe Harper Lee uses the mockingbird, as well as Tom and Boo's likeness of it, to reveal a dislike for the way precious things are treated in the society of the Deep South. Harper Lee also uses the children in the book to help continue the theme of innocence. Even when the unfairness in the court is apparent it is only Dill who gets upset. This is commented on when Mr Raymond says "seems that only children weep". I believe that Harper Lee uses the children to state a hatred for the way that innocence and an accurate perception of events is only now found in the mind of a child. To Kill a Mockingbird is a novel that could be read by a child and enjoyed for the touching story it encompasses, but it could also be read by an adult and be appreciated for the deep moral issues that are discussed within the book's pages. Because of this, To Kill a Mockingbird became a classic the day it was published and continues to be a classic today. ...read more.