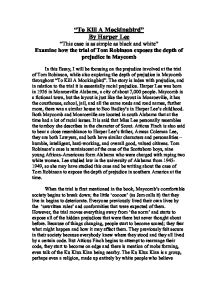 "To Kill A Mockingbird" By Harper Lee "This case is as simple as black and white" Examine how the trial of Tom Robinson exposes the depth of prejudice in Maycomb In this Essay, I will be focusing on the prejudice involved at the trial of Tom Robinson, while also exploring the depth of prejudice in Maycomb throughout "To Kill A Mockingbird". The story is laden with prejudice, and in relation to the trial it is essentially racial prejudice. Harper Lee was born in 1926 in Monroeville Alabama, a city of about 7,000 people. Maycomb is a fictional town, but the layout is just like the layout in Monroeville, it has the courthouse, school, jail, and all the same roads and road names, further more, there was a similar house to Boo Radley's in Harper Lee's childhood. Both Maycomb and Monroeville are located in south Alabama that at the time had a lot of racial issues. It is said that Miss Lee personally resembles the tomboy she describes in the character of Scout. Atticus Finch is also said to bear a close resemblance to Harper Lee's father, Amasa Coleman Lee, they are both Lawyers, and both have similar characters and personalities - humble, intelligent, hard-working, and overall good, valued citizens. Tom Robinson's case is reminiscent of the case of the Scottsboro boys, nine young African-Americans form Alabama who were charged with raping two white women. Lee studied law in the university of Alabama from 1945-1949, so she may have studied this case and be writing about the case of Tom Robinson to expose the depth of prejudice in southern America at the time. When the trial is first mentioned in the book, Maycomb's comfortable society begins to break down; the little 'cocoon' (as Jem calls it) that they live in begins to deteriorate. Everyone previously lived their own lives by the 'unwritten rules' and conformities that were expected of them. ...read more.

There is a lot of significance in this quotation, it clearly expresses the depth of prejudice in Maycomb, it is saying that Bob Ewell has the lowest status of white people, and is virtually as low as any Negro, because you have to 'scrub' a lot on the surface to see that he is white, but they think however low the white man is, underneath, he is still white, and that makes him better than any black man, even one as respectable as Tom Robinson, which shows definite racism. In the courtroom, the layout suggests that the blacks are not considered to be as important as the whites because they are all situated on the "coloured balcony" so they don't have as good a view as the whites, who are positioned right near the front. Also, no black people went into the courthouse until all of the white people had, "They waited patiently at the doors behind the white families", this was just normal to them and they wouldn't expect anything different because this is the only way they have known life to be; it is another 'unwritten rule' in their society. Because it is a normal thing, nobody thinks anything of it, but the trial of Tom Robinson magnifies such a small issue because the whole thing is about race and it makes people notice the littler things that were never previously addressed. Because of the people of Maycomb's racial prejudices, it is considered a strange thing to be friends with black people, and people who do mix with Negroes become outcasts. Dolphus Raymond lives his life with, and like, a Negro, he has had lots of children with a black woman, the children are known as 'mixed children'. Raymond always walks around holding a paper bag with a straw going into it, his reason for this is that he wants people to think he is an alcoholic (When in reality he has only Coca-Cola? ...read more.

Against the fence, in a line, were six chipped-enamel slop jars holding brilliant red geraniums, cared for as tenderly as if they belonged to Miss Maudie Atkinson...People said they were Mayella Ewell's." This shows that Mayella is not pure evil, she does have a bit of good in her and there is hope. There are a few things that give the same impression: the fact that she does not judge Tom because he's black and she does seem to genuinely care for him a little, the way she sometimes looks after the younger Ewells and a few more things. But any good in her heart is restrained because of her fathers prejudice, because she fears what might happen to her if she lets anybody see the real her. She was trapped by two prejudices, as Scout shows here, "She was as sad, I thought, as what Jem called a mixed child: white people wouldn't have anything to do with her because she lived among pigs; Negroes wouldn't have anything to do with her because she was white". "their relief cheque was far from enough to feed the family, and there was strong suspicion that Papa drank it up anyway - he sometimes went off in the swamp for days and came home sick; the weather was seldom cold enough to require shoes, but when it was, you could make dandy ones from strips of old tyres; the family hauled its water in buckets from a spring that ran out at one end of the dump - they kept the surrounding area clear of trash - and it was everybody for himself as far as keeping clean went: if you wanted to wash you hauled your own water; the younger children had perpetual colds and suffered from chronic ground-itch; there was a lady who came round sometimes and asked Mayella why she didn't stay in school - she wrote down the answer; with two members of the family reading and writing, there was no need for the rest of them to learn - Papa needed them at home" ...read more.