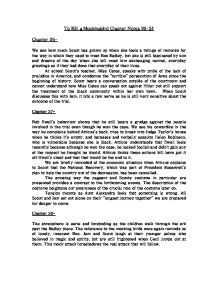 To Kill a Mockingbird Chapter Notes 26-31.

To Kill a Mockingbird Chapter Notes 26-31 Chapter 26- We see how much Scout has grown up when she feels a twinge of remorse for the way in which they used to treat Boo Radley, but she is still fascinated by him and dreams of the day when she will meet him exchanging normal, everyday greetings as if they had done that everyday of their lives. At school Scout's teacher, Miss Gates, speaks with pride of the lack of prejudice in America, and condemns the "terrible" persecution of Jews since the beginning of history. Scout hears a conversation outside of the courtroom and cannot understand how Miss Gates can speak out against Hitler yet still support the treatment of the black community within her own town. When Scout discusses this with Jem, it hits a raw nerve as he is still very sensitive about the outcome of the trial. Chapter 27- Bob Ewell's behaviour shows that he still bears a grudge against the people involved in the trial even though he won the case. ...read more.

We feel the tension as Jem thinks he hears someone following them and the children try to convince themselves its just their imaginations or Cecil Jacobs again. The children can't see in the dark but can hear rustling, dragging, shuffling- they know they are being followed. The suddenness of the attack is effectively conveyed through short sentences and Scouts confusion can be felt through the scuffling, kicking, scraping, ripping The man who saved them carries Jem home. We see Atticus's and Aunt Alexandra's panic and concern. Aunt Alexandra shows gentleness and sympathy as she carefully unwinds Scout form her wire and fabric. She is so concerned she gives Scout her overalls to wear- the clothes she most hates Scout wearing. Scouts greatest concern is that Jem is dead, and she shows little curiosity about the man who bough Jem home. The chapter end dramatically with the news of Ewell's death and the unexplained mystery of the man in the corner. Chapter 29 - We see Atticus and Aunt Alexandra under great strain. ...read more.

Heck knows it was Boo, but says that it would be a "sin" to put Boo through such an ordeal- once again reminding us of the mockingbird symbol, the central theme. Atticus needs to know that Scout understands the reason for Ewell's death being described as an accident. Scout's reply shows how much she has come to understand Atticus's humanitarian principles and Boo's shy, innocent nature. Chapter 31- Scout is sensitive to Boo's expressions and gestures. She knows when Boo wants to touch Jem, and she knows when Boo wants to leave. When she takes Boo home we she her tact and understanding as she makes it seem as if he is escorting her home and not the other way around. Standing on the Radley Porch Scout puts herself in Boo's shoes for a moment. She sees Boo watching his children trough all the seasons, from their early games to the moment of attack, when he saves there lives. Scout feels sad that they gave Boo no gifts in return. Atticus's last words in the novel are that most people are nice when you finally see them, once again demonstrating his great faith in humanity, even after recent events. ...read more.