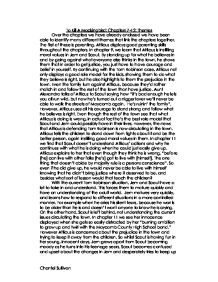 To Kill A Mockingbird: Chapters 7-12: Themes

To Kill A Mockingbird: Chapters 7-12: Themes Over the chapters we have already analysed we have been able to identify many different themes that link the chapters together. The first of these is parenting. Atticus displays good parenting skills throughout the chapters. In chapter 9, we learn that Atticus is instilling moral values in Jem and Scout. By standing up for what he believes in and by going against what everyone else thinks in the town, he shows them that in order to get justice, you just have to have courage and belief in yourself. By continuing with the Tom Robinson case, Atticus not only displays a good role model for the kids, showing them to do what they believe is right, but he also highlights to them the prejudice in the town. ...read more.

Atticus tells the children to stand down from fights about it and be the better person, again instilling good moral values in them. In chapter 11 we find that Scout doesn't understand Atticus' actions and why he continues with what he is doing when he could just easily give up. Atticus explains to her that even though they think he is wrong, "before [he] can live with other folks [he's] got to live with [himself]. The one thing that doesn't abide by majority rule is a persons conscience". So even if he did give up, he would never be able to live with himself knowing that he didn't bring justice where it deserved to be, and besides what sort of lesson would that teach the children? ...read more.

So whilst Scout is having fun in her young, innocent days, Jem grows apart from Scout becoming moody as he turns into his teenage years. Scout becomes confused and upset about the changes in Jem and desperately tries to keep up with him, but she doesn't have the understanding she needs to keep up. Also, it doesn't help that Jem sees himself as superior to Scout and is protective of Scout, forcing him to mature even more and pushing Scout even further away. He acts the adult when Scout is worried 'Jem put his arm around me "Hush, Scout, it ain't time to worry yet. I'll let you know when". He shows that he does care about Scout and sees that he needs to still be there for her, and can mature from his selfless acts of protecting her. Chantel Sullivan ...read more.