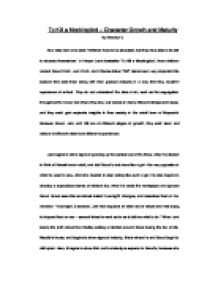 To Kill A Mockingbird - Character Growth and Maturity

To Kill a Mockingbird - Character Growth and Maturity By Wendy Fu As a wise man once said, "Children have to be educated, but they have also to be left to educate themselves." In Harper Lee's bestseller 'To Kill a Mockingbird', three children named Scout Finch, Jem Finch, and Charles Baker "Dill" Harris learn very important life lessons that aids them along with their gradual maturity in a way that they wouldn't experience at school. They do not understand the idea of sin, such as the segregation throughout the novel, but where they live, evil comes in many different shapes and sizes, and they each gain separate insights to their society in the small town of Maycomb. Because Scout, Jem, and Dill are at different stages of growth, they each learn and mature at different rates from different experiences. Jem begins to show signs of growing up the earliest out of the three, when he started to think of himself as an adult, and told Scout to act more like a girl-the very opposite of what he used to say-that she needed to stop acting like such a girl. ...read more.

Her childhood innocence is revealed at her first day of school, when she is scolded for knowing how to read and write by Ms. Caroline Fisher, and for speaking in Walter's favour. She wass just doing what she was told to do, and was told off as a result. These incidents reveal her innocence as a young child. When Walter Cunningham visits the Finch's home for lunch, and Scout witnesses Walter's terrible manners at the table, she blurts out, like any child would do, protesting that Walter is doing something terrible wrong, which in this case was pouring syrup all over his waffles. Scout doesn't understand it is rude to comment on other people's bad habits, and once again her childhood innocence is shown. Scout begins to understand prejudice and segregation of blacks and whites when Calpurnia takes her and Jem to a black church, where they learned that not all blacks like all whites, and becomes aware of Calpurnia's double life as a surrogate 'white' mother and a proud black woman. ...read more.

Dill begins to relate Boo to himself because both of them are at a household they do not want to be in, but Dill has a place to run away to-that being the Finch's house- while Boo has nowhere to go. Dill begins to comprehend many things and his character development is clear throughout the novel. In conclusion, Jem, Scout, and Dill all learned valuable life lessons from incidents, events regarding Tom Robinson, Boo Radley, and each other. They all grew at different stages in the book, at different paces. Though all of them were growing mature, Jem began to act more like a man, Scout decided to act more polite and like a lady, and Dill tried to grow out of his innocence. All of these children grew noticeably, and understood the community and what was happening in it. They all took Atticus' lessons to heart, and Scout proved it as she comments at the end of the novel, "You never really know a man until you stand in his shoes and walk around in them." ?? ?? ?? ?? 4 ...read more.