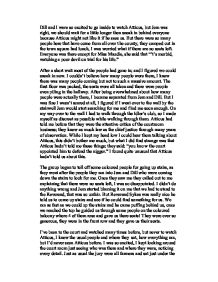 To Kill a Mockingbird creative writing - Dill and I were so excited to go inside to watch Atticus, but Jem was right

Dill and I were so excited to go inside to watch Atticus, but Jem was right, we should wait for a little longer then sneak in behind everyone because Atticus might not like it if he sees us. But there were so many people here that have come from all over the county, they camped out in the town square had lunch, I was worried what if there are no seats left. Everyone was there except for Miss Maudie, she said that "'t's morbid, watching a poor devil on trial for his life." After a short wait most of the people had gone in; and I figured we could sneak in now. I couldn't believe how many people were there, I knew there was many people coming but not to such a massive amount. ...read more.

I found quite unusual that Atticus hadn't told us about this. The group began to tell off some coloured people for going up stairs, as they went after the people they ran into Jem and Dill who were coming down the stairs to look for me. Once they saw me they called out to me explaining that there were no seats left, I was so disappointed. I didn't do anything wrong and Jem started blaming it on me that we had to stand to the Reverend, that was so unfair. But Reverend Sykes was really nice he told us to come up stairs and see if he could find something for us. We ran as fast as we could up the stairs and he came puffing behind us, once we reached the top he guided us through some people on the coloured balcony where 4 of them rose and gave us there seats! ...read more.

Sometimes he'll sit his feet up and start cleaning them with his pocket knife, he'll give the impression that he is falling asleep but in all truth he is paying attention and he has one very interesting rule; he allows smoking inside the court room he'll even indulge in a cigar now and then. Jem was being so stubborn; every time I tried to ask him a simple question he would snap at me and tell me to be quiet. So I left him alone and watched the court case. I felt sorry for both Mayella and Tom, Mayella has no friends, her siblings are much younger then her and her father is always drunk. She must be so lonely! But I think she's lying, Atticus just proved that Tom couldn't have done it because his left handed. That poor man he is being accused of something that he hasn't done, his friends and especially his family must be so worried for him. ...read more.