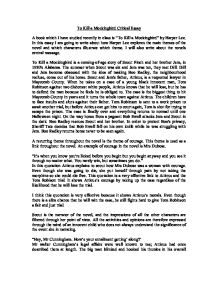 To Kill a Mockingbird Critical Essay

To Kill a Mockingbird Critical Essay A book which I have studied recently in class is "To Kill a Mockingbird" by Harper Lee. In this essay I am going to write about how Harper Lee explores the main themes of the novel and which characters illustrate which theme. I will also write about the novels central message. To Kill a Mockingbird is a coming-of-age story of Scout Finch and her brother Jem, in 1930's Alabama. The summer when Scout was six and Jem was ten, they met Dill. Dill and Jem become obsessed with the idea of making Boo Radley, the neighbourhood recluse, come out of his home. Scout and Jem's father, Atticus, is a respected lawyer in Maycomb County. When he takes on a case of a young black innocent man, Tom Robinson against two dishonest white people, Atticus knows that he will lose, but he has to defend the man because he feels he is obliged to. The case is the biggest thing to hit Maycomb County in years and it turns the whole town against Atticus. ...read more.

Scout is the narrator of the novel, and the impressions of all the other characters are filtered through her point of view. All the activities and opinions are therefore expressed through the mind of an innocent child who does not always understand the significance of the event she in narrating. "Hey, Mr Cunningham. How's your entailment getting' along?' Mr walter Cunningham's legal affairs were well known to me; Atticus had once described them at length. The big man blinked and hooked his thumbs in his overall straps. He seemed uncomfortable; he cleared his throat and looked away. My friendly overture had fallen flat." In this quotation we can see that Scout does not understand the position that her father is in. Her father is confronted by a mob who are intending to harm him, but she is unaware of that fact. She managed to disarm them with her youth and innocence in that way that she talked to Mr Cunningham as a friend. The way she tried to strike up a friendly conversation with him reminded him that they were neighbours and friends. ...read more.

They don't eat up people's gardens, don't nest in corncribs, they don't do one thing but sing their hearts out for us. That's why it's a sin to kill a mockingbird" In this quotation Atticus is telling the children why it is a sin to kill a mockingbird. This is the outlining theme throughout the rest of the novel. It unifies the two plot elements of Tom Robinson and Boo Radley. Both characters are the 'mockingbirds' of the novel. Both are harmless members of society and both are innocent people, yet in some way, both are persecuted by society. I think this quotation is important because it helps Scout understand near the end of the book why Boo Radley is like a mockingbird. She realises that he harms nobody and is an innocent member of society. In conclusion I feel Harper Lee has been very successful in portraying the main themes of the novel through different characters and their actions. I think that the central message of the novel is that everyone in society should be treated with equal justice and that it is wrong to persecute someone on the basis of their colour of skin or background. ...read more.