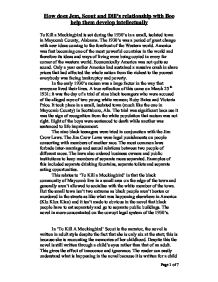 To Kill a Mockingbird - critical review

To Kill a Mockingbird is set during the 1930's in a small, isolated town in Maycomb County, Alabama. The 1930's was a period of great change with new ideas coming to the forefront of the Western world. America was fast becoming one of the most powerful countries in the world and therefore its ideas and ways of living were being copied in every far corner of the western world. Economically America was not quite so sound. Only a year earlier America had sustained a massive crash in share prices that had affected the whole nation from the richest to the poorest everybody was facing bankruptcy and poverty. In the early 1930's racism was a large factor in the way that everyone lived their lives. A true reflection of this came on March 25th 1931; it was the day of a trial of nine black teenagers who were accused of the alleged rape of two young white women; Ruby Bates and Victoria Price. It took place in a small, isolated town (much like the one in Maycomb County) in Scottsboro, Ala. The trial was significant because it was the sign of recognition from the white population that racism was not right. Eight of the boys were sentenced to death while another was sentenced to life imprisonment. The nine black teenagers were tried in conjunction with the Jim Crow Laws. The Jim Crow Laws were legal punishments on people consorting with members of another race. The most common laws forbade inter-marriage and sexual relations between two people of different races. ...read more.

Although Jem is the oldest he is still susceptible to extravagant ideas. His wild description of Boo Radley is an example of this: "Boo was about six-and-a-half feet tall...he dined on raw squirrels and any cats he could catch...there was a long jagged scar that ran across his face; what teeth he had were yellow and rotten; his eyes popped and he drooled most of the time. The description Jem gives is one that you are more likely to find in a 1980's horror movie than in a small town in the 1930's. The picture he draws is widely exaggerated and is probably the cause of an over active imagination. When Scout finds a "wad" of chewing in the knothole of an oak tree that jutted out of the Radley place she is immediately inclined to take it, but she also shows a recognition of the concept of stealing; "...hastily looked around once more" The way Harper Lee describes her, as hastily looking around shows that she doesn't want to get caught so won't rush what she is doing but is still impatient to get the chewing gum into her mouth and the fact that she is looking around for a second time once more shows that she is scared of the consequences that come from stealing. Jem shows the same fear of consequences when he and Scout find their second trinket in the old oak. "Jem looked around...and gingerly pocketed a tiny shiny package" Harper Lee describes Jem as gingerly pocketing the package this shows that he is cautious so as to not get caught. ...read more.

This helps Scout in her relationship with Boo Radley. Throughout the novel Scout tries to dissect the feelings and emotions that Boo has. She does this through a child like mind, so the reader does not get the full picture. But although Scout does never does realise the true implications of Boo Radley being a mockingbird symbol is does become clear to the reader as the novel progresses. Boo is a good symbol of a mockingbird because Boo doesn't do anything wrong all he does is play by himself, this links to a mockingbird because all a mockingbird does is sing beautiful songs and never harms anyone. Despite this both the mockingbird and Boo are persecuted, the mockingbird by keen shooters and Boo by the town gossipers. This novel has an amazing analytical interpretation of how life was for people in the 1930's. Not only does it give a wonderful insight onto the way young children lived their lives and how they learnt and developed intellectually in 1930's but it also gives a wonderful insight into many different worlds and the different life's people led in the 1930's. There are so many different ways to interpret this novel that is surely one of the best in all history. The novel is relevant even to day, as we look at how the children in our society learn and who influences them. The idea of a mockingbird and Atticus's idea of wearing another mans skin are still so relevant today it amazes me. How does Jem, Scout and Dill's relationship with Boo help them develop intellectually Page 1 of 7 ...read more.