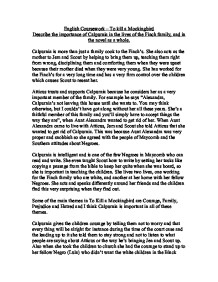 'To Kill a Mockingbird' : Describe the importance of Calpurnia in the lives of the Finch family, and in the novel as a whole.

English Coursework - To kill a Mockingbird Describe the importance of Calpurnia in the lives of the Finch family, and in the novel as a whole. Calpurnia is more than just a family cook to the Finch's. She also acts as the mother to Jem and Scout by helping to bring them up, teaching them right from wrong, disciplining them and comforting them when they were upset because their mother died when they were very young. She has worked for the Finch's for a very long time and has a very firm control over the children which causes Scout to resent her. Atticus trusts and supports Calpurnia because he considers her as a very important member of the family. For example he says "Alexandra, Calpurnia's not leaving this house until she wants to. You may think otherwise, but I couldn't have got along without her all these years. ...read more.

Some of the main themes in To Kill a Mockingbird are Courage, Family, Prejudice and Hatred and I think Calpurnia is important in all of these themes. Calpurnia gives the children courage by telling them not to worry and that every thing will be alright for instance during the time of the court case and the leading up to it she told them to stay strong and not to listen to what people are saying about Atticus or the way he's bringing Jen and Scout up. Also when she took the children to church she had the courage to stand up to her fellow Negro (Lula) who didn't want the white children in the Black church and said to her "they's my comp'ny" and "It's the same God, ain't it?". This made Lula annoyed so she went away and didn't say another word. ...read more.

She also helped to show the children how the people in Maycomb don't realize their own hypocrisy and she gives them an insight into what Negro life is actually like. Without Calpurnia Atticus would be very lonely because there would be no other adult living with him that he could talk to and he would have had no help when bringing up Jem and Scout. There would also be no one to look after the children when Atticus was at work, no one to cook the meals, no one to clean the house and no mother to love and care for the children. Overall Calpurnia is an important character in the Novel of To Kill a Mockingbird because she is involved in all the main themes of the book, She plays a big part in both cultures, she helps to bring up the finch children and she has been apart of Maycombs society for many years. ...read more.