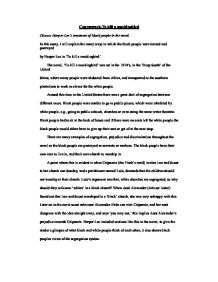 To kill a mockingbird - Discuss Harper Lee's treatment of black people in the novel.

Coursework-To kill a mockingbird Discuss Harper Lee's treatment of black people in the novel. In this essay, I will explain the many ways in which the black people were treated and portrayed by Harper Lee in 'To kill a mockingbird.' The novel, 'To kill a mockingbird' was set in the 1930's, in the 'Deep South' of the United States, where many people were abducted from Africa, and transported to the southern plantations to work as slaves for the white people. Around this time in the United States there was a great deal of segregation between different races. Black people were unable to go to public places, which were inhabited by white people, e.g., going to public schools, churches or even using the same water fountain. Black people had to sit at the back of buses and if there were no seats left for white people the black people would either have to give up their seat or get of at the next stop. There are many examples of segregation, prejudice and discrimination throughout the novel as the black people are portrayed as servants or workers. The black people have their own area to live in, and their own church to worship in. A point where this is evident is when Calpurnia (the Finch's maid) ...read more.

The guilty verdict was due to a racist, 'all white' jury, who never intended to give Tom the benefit of the doubt. Tom was given an unfair trial, and was found guilty, even though the evidence confirmed that he was innocent. The case was purely Black against White, and the novel depicted white winning against black. Tom is a very 2-D character because when you first read the novel you know that he is innocent, there is no indication to hint that Tom might have actually committed the crime. The novel would seem more interesting if there was a twist in it because Tom seems too perfect. When Tom was in jail and Atticus went to guard him, as he received a tip-off that an angry mob was going to the jail that evening to kill Tom, because he was the black man who allegedly raped a white girl named Mayella Ewell. The mob was a group of men who were willing to take the law into their own hands, just to kill Tom Robinson before the trial; they resemble the Ku Klux Klan, in some manor. This showed an 'underground' violence, which emerged before the rape case took place. The incident showed a hatred and a fear of black people, which was about to arise, but was pacified by a child. ...read more.

Atticus showed a respect towards black people, unlike most white men, living in Maycomb. In Maycomb County every black person lives in the bad part of town, also known as the 'slum.' Even if they had the money, they wouldn't have been able to live in an upper class area like the Finches. This is because they were considered as dirty and unsanitary, consequently white people did not want them living next to their houses. My conclusion is that the black characters in the novel are too idealized. Lee needs to present them in more detail, so we understand their character to the fullest. E.g. Calpurnia is almost like a mother to Jem and Scout, yet we know very little about her past, her private life or her opinions about white characters in the novel. Tom Robinson is accused of raping a white girl he is obviously guiltless, but we don't know his full history, could he have been accused of rape before? What is going through his mind during the trial? Despite Lee not knowing every single detail about a black person, She could have researched black people more, to make the black characters seem more realistic, at the moment they seem too flawless and innocent. She has to remember that not all black people are the same, everyone has their faults. By Charlotte Simon ...read more.