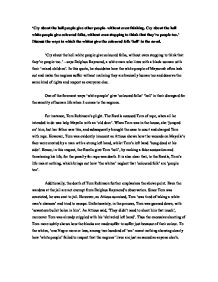 To Kill a Mockingbird. Discuss the ways in which the whites give the coloured folk hell in the novel.

Another way the 'white people' give the 'coloured folk' 'hell' is by humiliating and insulting them. This is seen in Mr Gilmer's cross-examination of Tom Robinson. Mr Gilmer starts off by arrogantly putting himself above Tom, by addressing Tom, a man as much as Mr Gilmer, as 'boy' instead of by name. Additionally, Mr Gilmer attacks Tom's character unnecessarily in court. He insinuates that Tom had sexual motives in helping Mayella with her 'chores', and that he had his 'eye on her' in front a courthouse full of people. The 'hell' Mr Gilmer makes Tom Robinson feel here is different from what the Ewells inflict on him, but it is nonetheless hurtful. In court, Mr Gilmer cast unwarranted doubts on the honesty of Tom's intentions and his morals as a man, humiliating and degrading him, without any consideration for his feelings. On a similar note, intimidation is also another way whites give the 'coloured folk' 'hell'. ...read more.

The 'hell' in this instance is less obvious, but through this incident it is evident that in Maycomb, the whites wield a certain power and authority over the 'coloured folk' even though the slave trade had already been abolished. Sometimes, like in the case of Mrs Merriweather, this authority is abused, making the 'coloured folk' suffer to fit the whims and fancies of the whites. To conclude, the 'hell' the whites force the 'coloured folk' and the suffering they make them endure may vary from case to case. In spite of this, the underlying cause of this is that the whites put themselves above the 'coloured folk' and fail to realize that they are all of the same race - the human race, and all deserve the same respect. Even in the courthouse, in which Atticus says 'all men are created equal', prejudice prevails and Tom Robinson is convicted and made to suffer for a crime he did not commit because of the colour of his skin, and the pigheadedness of a white family called the Ewells. ...read more.