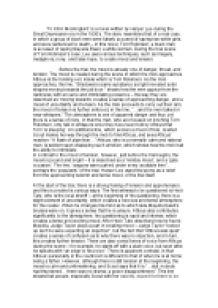 To Kill A Mockingbird - How does Harper Lee create mood and atmosphere in the trial scene?

﻿?To Kill A Mockingbird? is a novel written by Harper Lee during the Great Depression era in the 1930?s. The story resembles that of a real case, in which a group of black men were falsely accused of raping two white girls, and were sentenced to death ? in this novel, Tom Robinson, a black man, is accused of raping Mayella Ewell, a white woman. During the trial scene of Tom Robinson?s case, Lee uses various techniques, such as imagery, metaphors, irony, and false hope, to create mood and tension. Before the trial, the mood is already one of danger, threat, and tension. The mood is created during the scene in which the mob approaches Atticus is the holding cell, inside which is Tom Robinson. As the mob approaches, the line, ?Shadows became substance as light revealed solid shapes moving towards the jail door.? shows how the men appear from the darkness, with an eerie and intimidating presence ? the way they are described as ?moving towards? creates a sense of approaching danger, and a mood of uncertainty and tension. As the mob proceeds to carry out their aim, the mood of tension is further enforced, in the line, ??and the men talked in near-whispers.? The atmosphere is one of apparent danger and fear, yet there ...read more.

These quotes give a vivid picture as to how bad the injuries inflicted upon Mayella were ? the images created give a sense of fear and nerves, but a sense of curiosity because it is uncertain how the case will turn out. Mayella also describes in her statement, how Tom ?got her around the neck, cussing and saying dirt.? ? this is horrific to the reader, as they know that Mayella is lying. When Bob Ewell is being questioned, he describes how he found Mayella ?screamin? like a stuck hog? ? this is horrific for the reader, as Mayella is his daughter, and it is an unexpected and brutal way to describe her state. Harper Lee uses such harsh and inflammatory description to create a mood of anger and tension, and to evoke emotion from the reader. At various points in the trial scene, Harper Lee describes the jury and spectators, and their actions. One of the first things shown about the spectators, is that they?re so keen to witness the trial ? Reverend Sykes tells Jem and Scout that ?There?s not a seat downstairs?, which shows that it is overcrowded, as does the quote, ?They squeezed past?? It is also shown that the spectators are very attentive, as they change suddenly after hearing Bob Ewell?s account ...read more.

The relevance of the questions asked by Atticus is not always apparent, yet this creates a mood of apprehension; for example, when Atticus asks Bob Ewell, ?Will you write your name and show us??, the question seems immaterial, yet when the reader sees the relevance of it, there is a sense of satisfaction. In contrast to the calm mood, which Atticus displays for the most part of the trial scene, there is an eventual change, in which he becomes more stinging and forceful in his attack ? he takes on a more ?arid, detached professional voice?, and he starts to repeat his questions quickly. This change causes his voice to lose it?s original ?comfortableness?, which in turn creates a mood of nervousness, anxiety, and tension. During the trial, Atticus also uses various interrogation methods. At the beginning of the trial, he uses short, quick fire questions, to determine the basic details of the supposed ?rape?. For example, when questioning Heck Tate, he asks questions such as ?What night, sir??, ?Did you go??, and ?And what did you find??. During the same questioning, he starts to use repetition of key questions; when he asks Heck ?Did you call a doctor, Sheriff??, Heck replies, ?No sir,? Even though, to the reader, this seems like a satisfactory answer to the question, Atticus goes on to repeat it. ...read more.