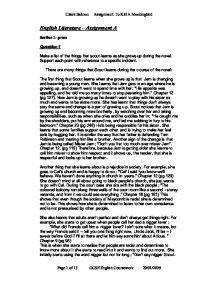 To Kill A Mockingbird Imagery and Symbolism

English Literature - Assignment A Section 1: prose Question 1 Make a list of the things that scout learns as she grows up during the novel. Support each point with reference to a specific incident. There are many things that Scout learns during the course of the novel: The first thing that Scout learns when she grows up is that Jem is changing and becoming a young man. She learns that Jem gets to an age where he is growing up, and doesn't want to spend time with her; "His appetite was appalling, and he told me so many times to stop pestering him." Chapter 12 (pg 127). Now Jem is growing up he doesn't want to play with his sister so much and wants to be alone more. She has learnt that things don't always stay the same and change is a part of growing up. Scout notices that Jem is growing up and becoming more brotherly, by watching over her and taking responsibilities, such as when she cries and he cuddles her in; "He caught me by the shoulders, put his arm around me, and led me sobbing in fury to his bedroom." Chapter 23 (pg 248) He's being responsible for his sister. She learns that some families support each other and is trying to make her feel safe by hugging her. It is similar the way that her father is defending Tom Robinson and treating him like a brother. Another sign of the change is that Jem is being called Mister Jem; "Don't you fret too much over mister Jem". Chapter 12, (pg 115) Therefore, because Jem is getting older she learns to call him mister to show him respect and it shows us, the reader, that she is respectful and looks up to her brother. Another thing that she learns about is prejudice in society. For example, she goes to Cal's church and is happy to do so; "'Cal' I said 'you know we'll behave. ...read more.

Finally, the 'rut road' shows how difficult it is to move around in maycomb and make progress in a town so entrenched with it's fixed ideas. The reason that she has written about there physical surroundings is to give us insight into the wider problems of the community and where they fit in. Harper Lee describes Scout and Jem making a snow man on the first day it snows since 1885; "No a real snow man ... Jem, I ain't ever heard of a nigger snowman" Chapter 8 (pg 72-73) By the description that we are given we know that Jem has added mud to the snow, and by what Scout says helps to portray the picture of a black snow man for the reader. How ever this innocent image suggests that Jem doesn't care about stereo types and what people think as she didn't see anything wrong with a black snow man. Yet Scout represents the general Maycomb society in reminding his sister that things should be done properly and that colour is an important issue. The effects that this has on me as the reader is that it makes you realise how children were racist at such young age because of the words that they learnt at school. Furthermore, Harper Lee describes what the Ewell's house is like; "Macomb's Ewell's lived behind the town garbage dump in what was once a Negro cabin. The cabins plank walls were supplemented with sheets of corrugated iron, its roof shingled with tin cans hammered flat so only its general shape suggested its original design: square, with 4 tiny rooms opening on to a shotgun hall." Chapter 17 (pg 187) Harper Lee has used a lot of description by telling us so that we can imagine how impoverished the Ewell's house is because it was once a negro cabin and was made of materials normally thrown away such as tin cans. ...read more.

Atticus knows that bravery is more than the decision to carry a gun and life doesn't revolve around guns and violence and there is other ways to deal with it. Atticus shows bravery when he takes Toms' case despite knowing that his town would turn against him because they are so prejudiced and his children would have to suffer because of the things people at school would say. Cecil Jacobs said in the school play ground; "Scout Finche's daddy defended nigger" and when they go for Christmas at Finches landing; Francis jerked looses and sped into the old kitchen, "nigger lover" he yelled. Jem shows bravery when the children intervene on behalf of Atticus, and Jem refuses to leave his father's side during the showdown with farmers at the jailhouse. This shows that Jem is proud to support his father even though other people are against him. Perhaps the biggest lesson that Scout must learn is to turn away and show real bravery rather than fight when people antagonize her and in the end she does learn about it and manages to walk away; "I drew a bead on him, remembered what Atticus had said then dropped my fists and walked away." Atticus is using his influence on the children and teaching them what he has learnt and that violence is the not only way to sort something out. I think that this is a good way to teach your children as it gets to think for themselves and become strong independent and able to defend them selves and others as well. Atticus' most important role in the book is being a teacher, to all sorts of people not only his own children, he remains to be the concept of showing acceptance of all people and to try to help them even in difficult circumstances. During the course of the book he helps out with people's lives and trying to keep people out of trouble. Clearly, with Tom Robinson's case, the characters deal with racial prejudice head on. ...read more.