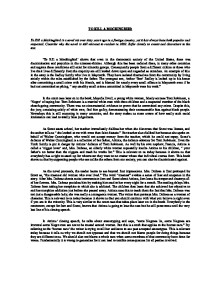 To Kill a Mockingbird is a novel set over sixty years ago in a foreign country, yet it has always been both popular and respected. Consider why the novel is still relevant to readers in 2002. Refer closely to events and characters in the text.

TO KILL A MOCKINGBIRD To Kill a Mockingbird is a novel set over sixty years ago in a foreign country, yet it has always been both popular and respected. Consider why the novel is still relevant to readers in 2002. Refer closely to events and characters in the text. 'To Kill a Mockingbird' shows that even in the democratic society of the United States, there was discrimination and prejudice in the nineteen-thirties. Although this has been reduced there, in many other countries and regions these conditions still exist for minority groups. Consequently people from a different culture or those who live their lives differently from the majority are still looked down upon and regarded as outsiders. An example of this in the story is the Radley family who live in Maycomb. They have isolated themselves from the community by living strictly within the rules established by the father. The youngest son, Arthur 'Boo' Radley is locked up in his house after committing a small crime with his friends, and is blamed for nearly every small offence in Maycomb even if he had not committed anything, " any stealthy small crimes committed in Maycomb were his work." ...read more.

This book shows us that by supporting people who are unlike the others from our society, you can also be discriminated against. As the novel proceeds, the reader learns to see beyond first impressions. Mrs. Dubose is first portrayed by Scout as, "the meanest old woman who ever lived." The word "meanest" evokes a sense of fear and suspense in the story. After Mrs. Dubose shouts racist comments to Jem and Scout about Atticus, Jem loses his temper and destroys all of her flowers. Mrs. Dubose punishes him by making him read to her every night for a month. The reading delays Mrs. Dubose from taking her morphine to which she is addicted. The children then learn that she achieved her objective to end her morphine addiction just before she passed away. Atticus uses this to teach them the fact that Mrs. Dubose was not just a disagreeable lady; she was really a courageous woman. The writer then portrays Mrs. Dubose as a woman of character. This is relevant to us today because it shows us that you should continue with what you believe is right even if you are in the minority. ...read more.

By referring to "Soon's I get grown," the writer is revealing Jem's aim to break down the segregation in Maycomb, just like his father. This book was written in the nineteen-thirties, a time when women were regarded as unequal to men. Young girls like Scout were expected to wear dresses and behave in a ladylike manner all the time, but Scout was a tomboy. Throughout the novel, Scout learns about women's status mainly from her Aunt Alexandra. Even in the Finch family, Aunt Alexandra demonstrates prejudice against Scout and makes her behave like a lady by saying things like, "Jean Louise, stop scratching your head," and, "it would be best for you to have some feminine influence." Mrs. Dubose also demonstrates prejudice against Scout when she says, "you should be in a dress and camisole, young lady!" This prejudice against women is relevant to us today because it shows us through fiction how unfair intolerance against people is. At the moment, in some countries, women are still considered as inferior and some women are not allowed to vote. In addition, some women have to wear items of clothes that cover up their whole bodies and it is prohibited for women to work. ?? ?? ?? ?? ...read more.