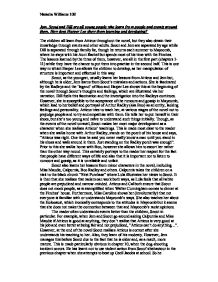 To Kill a Mockingbird Jem, Scout and Dill are all young people who learn from people and events around them. How does Harper Lee show them learning and developing?

Jem, Scout and Dill are all young people who learn from people and events around them. How does Harper Lee show them learning and developing? The children all learn from Atticus throughout the novel, but they also obtain their knowledge through events and other adults. Scout and Jem are separated by age while Dill is separated through family lie, though he returns each summer to Maycomb, where he stays with his Aunt Rachel but spends most of his time with the Finches. The lessons learned by the three of them, however, are all in the first part (chapters 1-11) while they have the chance to put them into practise in the second half. This is one way in which Harper Lee allows the children to develop, as her manipulation of structure is important and effectual in this way. Scout, as the youngest, usually learns her lessons from Atticus and Jem but, although he is older, Jem learns from Scout's mistakes and actions. She is fascinated by the Radleys and the 'legend' of Boo and Harper Lee shows this at the beginning of the novel through Scout's thoughts and feelings, which are illustrated via her narration. Dill fuels this fascination and the investigation into the Radleys continues. However, she is susceptible to the acceptance of the rumours and gossip in Maycomb, which lead to her belief and portrayal of Arthur Radley (aka Boo) ...read more.

However, at the end of the novel Scout realises Atticus is correct after she understands his teaching to her. Also, they learn of his modesty. However, Jem manages this before Scout due to the fact that he is older and, as a result, more mature. This is made particularly obvious in chapter 10, when the dog-shooting incident occurs. He has learnt not to use violent action from Scout's behaviour in the previous chapter when she attempts to beat up Cecil Jacobs at school. So he understands Atticus' reluctance to shoot the dog when requested by Heck Tate, Maycomb County's Sheriff. However, he also realises that Atticus is unwilling to brag about his talents and would prefer them to believe he was useless than boast about it. Jem's behaviour shows his understanding as he warns Scout when she wishes to show off about Atticus' talent. Jem's development is shown actively by some of the minor characters in the novel, which make the stages of his adolescence more obvious to the reader. Miss Maudie allows him to have a larger slice of cake, while Dill and Scout receive small cakes. Cal begins to call him "Mr Jem" as opposed to simply "Jem" and his body begins to change, much to his glee. Jem matures more suddenly than the other two children, but they still learn together. ...read more.

His wish is granted when he stays with the Finch family, which results in him no longer 'telling tales' at the end of the novel. He instead uses his imagination to describe real events in a poetic way e.g. on page 246 when he describes Helen Robinson, "...she fell down in the dirt, like a giant with a big foot just came along and stepped on her... like you'd step on an ant." However, it is still obvious that he has a lot of time before he matures to the extent of Jem and even Scout, due to his undiscerning comments such as the description above. Despite this, it is important to argue his innocence in that he did not mean to be insensitive about the situation. He may take longer due to his background ,which will always act as a barrier in his character's development. Therefore, it is important to conclude that, although the children learn and develop in different ways, there is still some correlation between them as they learn together and teach one another. Harper Lee uses various techniques of structure and literary skill to make this possible. She allows them to be taught by other characters and events happening around them, which often correspond to one another in order to reinforce important teachings. The first half sets them up for the second part, during which the trial takes place. This further catalysis of the characters' education clinches the efforts of the first part. ?? ?? ?? ?? Natasha Williams 10E ...read more.