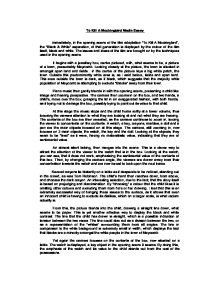 To Kill A Mockingbird Media Essay

To Kill A Mockingbird Media Essay Immediately, in the opening scene of the film adaptation "To Kill A Mockingbird", the "Black & White" separation, of that generation is displayed by the colour of the film itself, black and white. The issues and ideas of the film are brought on by the techniques used in the opening scene. It begins with a jewellery box, centre pictured, with, what seems to be, a picture of a town, presumably Maycomb. Looking closely at the picture, the town is situated in amongst open land and fields. In the centre of the picture lays a big white patch, the town. Outside this predominantly white area is, as I said before, fields and open land. This area outside the town is dark, as if black, which suggests that the majority white population of Maycomb is attempting to exclude "Blacks" away from their town. Piano music then gently blends in with the opening scene, presenting a child like image and hearing perspective. The camera then zooms in on the box, and two hands, a child's, move over the box, grasping the lid in an exaggerated fashion, with both hands, as if trying not to damage the box, possibly trying to point out its value to that child. ...read more.

From this, the picture blends into the child, drawing a straight line down, what seems to be paper. This is yet another effective way to display the black and white contrast. The line that the child has drawn is straight, which is a possible indication of tension between the two races. The line could also act as a division between the two, or as a representation of the "whites" surrounding them from all angles. The line in comparison to the white background is extremely small in width, which displays the fact that blacks are a minority amongst the white people in the town of Maycomb. Yet again the camera focuses on the contents of the box, now situated on a table. The watch is displayed, a key object in the opening scene it seems. By doing this, the emphasis of the watch and its value to the child stands out from the rest of the possessions. As the camera view continues to pan right, other objects become of similar symbolic importance to the watch. A pen, also previously situated in the box, is shown again, but an object of high symbolic value to this opening scene, to me, was the safety pin, which lie close to the watch. ...read more.

Not necessarily moving forward, as to move forward is to progress. The black marble, being the physical representation of the black people of Maycomb, prevents the previous marble from moving, stopping the turbulence yet still continuing the argument, trying to become "One". The watch then reappears and the end of time is known as the watch no longer ticks, meaning that the watch has permanently stopped, as has time in Maycomb. Repetition of the Mockingbird also occurs, the child still drawing, taking time over it. The crayon then drops on the watch. Surprise has, as if, struck the child, as if something has gone wrong. Then it cuts to the child scribbling over the Mockingbird. "It is a sin to kill a Mockingbird" as quoted in the story. This is doing so. Killing the mockingbird, a child's way of doing so. The paper on which it is drawn is then torn. A black background, burst onto the scene, battling for its rightful place in equality. A fairness in the conflict as both have equal space showing a fair battle between the two, another way to display the racism of that generation. The camera then pans down the paper that has an uneven shape, like a tree, into which it morphs into, to finish off the opening scene. ...read more.