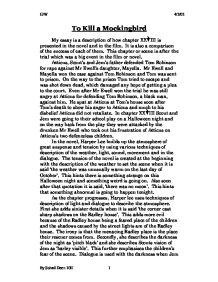 To Kill a Mockingbird - My essay is a description of how chapter XXVIII is presented in the novel and in the film.

To Kill a Mockingbird My essay is a description of how chapter XXVIII is presented in the novel and in the film. It is also a comparison of the success of each of them. This chapter or scene is after the trial which was a big event in the film or novel. Atticus, Scout's and Jem's father defended Tom Robinson for rape against Mr Ewell's daughter, Mayella. Mr Ewell and Mayella won the case against Tom Robinson and Tom was sent to prison. On the way to the prison Tom tried to escape and was shot down dead, which damaged any hope of getting a plea to the court. Even after Mr Ewell won the trial he was still angry at Atticus for defending Tom Robinson, a black man, against him. He spat at Atticus at Tom's house soon after Tom's death to show his anger to Atticus and much to his disbelief Atticus did not retaliate. In chapter XXVIII Scout and Jem were going to their school play on a Halloween night and on the way back from the play they were attacked by the drunken Mr Ewell who took out his frustration of Atticus on Atticus's two defenceless children. In the novel, Harper Lee builds up the atmosphere of great suspense and tension by using various techniques of description of the weather, light, sound, movement and in the dialogue. ...read more.

Also, soon after, Scout describes the quietness of the night when it is said 'hear his breath coming easily beside me' this shows it is not very hard to hear every sound and the atmosphere is very quite. During the attack Harper Lee describes the atmosphere of the fight with the sounds herd by Scout 'scuffling, kicking sounds, sounds of shoes and flesh scraping dirt and roots' this creates tension and suspense as you do not know who is hitting who and who is the attacker. Also Scout describes her movement as 'I stood there dumbly' this shows she was stunned by it all and her mind was working slowly. In the film music, lighting, camera angles are used to show the atmosphere as description techniques cannot be shown, because of this some things are omitted for effect and some things are added. The main thing that was not in the film was Cecil Jacobs jumping out at them on the way to the schoolhouse and in the schoolhouse. This was so the tension is carried on the whole way through the story and there is no happiness in between. There was a few things changed and added in the film, one was Jem was meant to be carrying Scout's costume but in the film Scout was wearing it. ...read more.

Another reason for the camera focusing only on their feet is to remind us that the film is based on Scout's view and she is the narrator. I feel the film is more effective than the novel as the suspense and tension is built up more efficiently. The film does not include any happy or childish behaviour to break up the tension during the film for example the play or Cecil Jacobs scaring them on the way to the play and the novel does. Another reason is you can see the individual reactions made by Jem and Scout in the film, even though you don't know what they are really feeling inside, it's more exciting watching them instead. Also Music added to the film makes it tenser, scary, and exciting and is used to build suspense which cannot be done this easy in a novel. My final reason is the movement in a novel is harder to follow than to watch it in the film. In conclusion I feel that the novel has les advantages and the film has more advantages as in a film the novel's images are easier to remember in my mind than the imaginations I have to make from the novel. The choices of the director of the music, light, camera angles and slight changes from the novel all have their own roles which create cinematic tension, excitement, mystery and speed, these all combine to make a very commendable film. H/W 4/2/02 1 By Sohail Deen 10H ...read more.