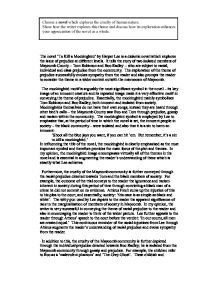 To Kill a Mockingbird - prejudice

The novel 'To Kill a Mockingbird' by Harper Lee is a didactic novel which explores the issue of prejudice at different levels. It tells the story of two isolated members of Maycomb County - Tom Robinson and Boo Radley - who are subject to racial, individual and class prejudice from the community. The exploration of the theme of prejudice successfully evokes sympathy from the reader and also prompts the reader to consider the theme in a wider context outwith the microcosm of Maycomb. The mockingbird motif is arguably the most significant symbol in the novel - its key image of an innocent creature and its repeated image make it a very effective motif in conveying the theme of prejudice. Essentially, the mockingbird mainly symbolises Tom Robinson and Boo Radley, both innocent and isolated from society. ...read more.

Furthermore, the cruelty of the Maycomb community is further conveyed through the racial prejudice directed towards Tom and the black members of society. For example, the outcome of the trial conveys to the reader the ignorance and racism inherent in society during this period of time through convicting a black man of a crime he did not commit on no evidence. Atticus Finch sums up the injustice of this to his plea to the court, and essentially, society: 'this case is as simple as black and white'. The witty pun used by Lee depicts to the reader the apparent significance of race to the marginalisation of members of society in Maycomb. In my opinion, the writer is very successful in conveying the theme of racial prejudice to the reader and also in encouraging the reader to think of the wider picture. ...read more.

Once he said you never really understand a man until you stand in his shoes and walk around in them. Just standing on the Radley porch was enough.' Lee here not only successfully depicts the individual prejudice inherent in society through the characterisation of Boo Radley, but also conveys an important theme of growing up and also, to some extent, issues of education as Scout has finally learned from Atticus' maxim, mirroring Macomb's gradual 'baby steps' towards social change. In conclusion, the symbolism of the mockingbird, the characterisation of Boo and the outcome of the trial play a significant part in conveying the many branches of prejudice and the cruelty of human nature in Maycomb as a microcosm. The exploration of this hardly sporadic theme help to evoke sympathy and empathy from the reader towards the isolated members of Maycomb - primarily Boo Radley and Tom Robinson , but Lee also successfully encourages the reader to consider ...read more.