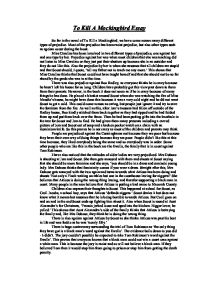 To Kill A Mockingbird - Prejudice.

To Kill A Mockingbird Essay So far in the novel of To Kill a Mockingbird, we have come across many different types of prejudice. Most of the prejudice has been racist prejudice, but also other types such as ageism occur during the book. Miss Caroline has been involved in two different types of prejudice, one against her and one type by her. Prejudice against her was when most children that she was teaching did not listen to Miss Caroline or they just put their shutters up because she is an outsider and they do not like this. Also the prejudice by her is when she assumes that all children are stupid and that Scout should, I quote, 'tell my father not to teach me any more.' This shows that Miss Caroline thinks that Scout could not have taught herself and that she should not be so far ahead by the grade she was in at the time. ...read more.

Then he had been putting gifts into the knothole in the tree for Scout and Jem to find. He had given them many presents including a carved picture of Jem and Scout out of soap and a broken pocket watch on a chain with an aluminium knife. So this proves he is not crazy as most of the children and parents may think. People are prejudiced against the Cunninghams not because they are poor but because they have their own way of doing things because they are poor. People didn't like this at this time because, they liked everybody being the same and so everybody was in order. Some other people who are like this in the book are the Ewells, the family that is in court against Tom Robinson. I have also noticed that the attitudes of older ladies are very prejudiced. ...read more.

Also when Scout is round at Aunt Alexandra's for Christmas, 'Francis jerked loose and sped into the kitchen. Nigger-lover, he yelled.' This shows that Aunt Alexandra's side of the family thinks that Atticus is betraying the family and, like Mrs Dubose, they think he is doing the wrong thing. There is also ageism against Atticus by Scout as she thinks Atticus was past his best in life and was feeble as he was 'nearly fifty.' There is huge controversy surrounding the trial of Tom Robinson as 'the only thing they have got is a black man's word against the Ewells'. The evidence boils down to you-did - I-didn't. The jury couldn't possibly be expected to take Tom Robinson's word against the Ewells'. This proves that everyone knows that a black man could not win a court case against a white man. This is because the jury is racist and so will not believe a black man. If they believed Tom then it would stop him from going to prison or stop him from getting the death penalty. ...read more.