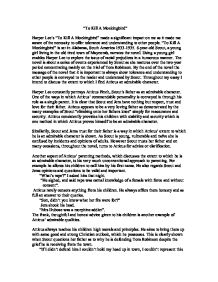 "To Kill A Mockingbird" Harper Lee's "To Kill A Mockingbird" made a significant impact on me as it made me aware of the necessity to offer tolerance and understanding to other people. "To Kill A Mockingbird" is set in Alabama, South America 1933-1935. 6-year-old Scout, a young girl living in the old tired town of Maycomb, narrates the novel. Using a young girl enables Harper Lee to explore the issue of racial prejudices in a humorous manner. The novel is about a series of events experienced by Scout as she matures over the two-year period concentrating mainly on the trial of Tom Robinson. By the end of the novel the message of the novel that it is important to always show tolerance and understanding to other people is conveyed to the reader and understood by Scout. Throughout my essay I intend to discuss the extent to which I find Atticus an admirable character. Harper Lee constantly portrays Atticus Finch, Scout's father as an admirable character. One of the ways in which Atticus' commendable personality is conveyed is through his role as a single parent. It is clear that Scout and Jem have nothing but respect, trust and love for their father. Atticus appears to be a very loving father as demonstrated by the many examples of Scout "climbing onto her fathers knee" simply for reassurance and security. Atticus consistently provides his children with stability and security which is one method in which Atticus proves himself to be an admirable character. ...read more.

He is seen to allow his children to run wild. This is clearly shown when Scout is being criticized for failing to dress like a lady and wear dresses. However in the face of much insulting comments Atticus always remains calm. By doing so he teaches Scout and Jem dignity and self-discipline. Atticus' ability to disregard and ignore they torments and abuse of the members of the town illustrates the extent to which I find him an admirable character, through his role as a parent. Similarly, the extent to which Atticus is an admirable character is proven by the manner in which he operates and conducts himself as a lawyer. Atticus whole-heartedly defends Tom Robinson much to the disgust and disbelief of the majority of the citizens of Maycomb. As Tom is black, he is regarded as significantly inferior to the white citizens by the majority of the community and therefore does not deserve a fair trial against Mayella. Despite the general attitude of the community Atticus believes that racial prejudices should not be accepted or tolerated and decides to defend Tom Robinson unconditionally. Atticus suffers much abuse from many people in Maycomb. The night before the trial Atticus was sitting at the jail cell of Tom Robinson when an angry mob approached threatening to assault Atticus if he continued to defend Tom in the manner in which he was doing so. By the end of the trial Atticus becomes familiar with the derogatory and insulting term "nigger-lover". ...read more.

"We don't have anything to fear of Bob Ewell, he got it all out of his system this morning". Due to Atticus' kind and positive outlook he seriously misjudges the anger and capability of Bob Ewell resulting in Jem being injured and narrowly escaping with his life. Although this is Atticus' one downfall it fails to portray him as anything less than admirable. Atticus remains an admirable character as the evidence present proves that his one fault is simply a result of his positive and good Christian outlook. The novel illustrates the importance of always offering tolerance and understanding to other people. This message is conveyed to the reader through the lessons and advice taught to Scout and Jem by their father Atticus Finch. Atticus Finch is an unforgettable character. His attitude and outlook on life evokes admiration from the reader. Atticus defies the vast majorities opinions and racial prejudices of the 1930s and promotes racial equality. However voicing and acting upon his very much individual opinion was not free of consequence. Atticus and his family suffered much insult and abuse. Both Atticus and his children faced life-threatening situations throughout the novel. However, Atticus remained dignified and maintained his strong and high principles. In "To kill A Mockingbird" many lessons are taught to the reader through the narration of Scout and the wise advice given by Atticus. Atticus consistently proves to be a loving, stable and trusting father, an understanding, high principled and wise lawyer and a helpful, respectable and dignified citizen. In conclusion, the attitudes, actions and beliefs of Atticus Finch demonstrate that he is clearly an extremely admirable character. ...read more.