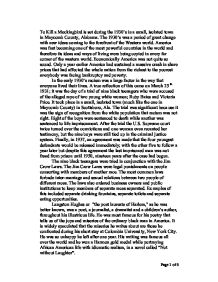 To Kill a Mockingbird - review

To Kill a Mockingbird is set during the 1930's in a small, isolated town in Maycomb County, Alabama. The 1930's was a period of great change with new ideas coming to the forefront of the Western world. America was fast becoming one of the most powerful countries in the world and therefore its ideas and ways of living were being copied in every far corner of the western world. Economically America was not quite so sound. Only a year earlier America had sustained a massive crash in share prices that had affected the whole nation from the richest to the poorest everybody was facing bankruptcy and poverty. In the early 1930's racism was a large factor in the way that everyone lived their lives. A true reflection of this came on March 25th 1931; it was the day of a trial of nine black teenagers who were accused of the alleged rape of two young white women; Ruby Bates and Victoria Price. It took place in a small, isolated town (much like the one in Maycomb County) in Scottsboro, Ala. The trial was significant because it was the sign of recognition from the white population that racism was not right. Eight of the boys were sentenced to death while another was sentenced to life imprisonment. ...read more.

Scout shows Dills fear of the house when she says: "...but drew him no nearer than the light-pole on the corner" Scout is saying that despite having a wild sense of adventure and a massive desire to explore the house. Dill was still terrified because of the rumours surrounding Boo's existence. Boo is described as; "Inside the house lived a malevolent phantom...people said he went out at night when the moon was down, and peeped in the windows. When peoples azaleas froze in a cold snap, it was because he had breathed on them." This quote shows that the three children are very easily influenced and don't quite understand the way stories can be manipulated as they pass around the rumour mill. Although Jem is the oldest he is still susceptible to extravagant ideas. His wild description of Boo Radley is an example of this: "Boo was about six-and-a-half feet tall...he dined on raw squirrels and any cats he could catch...there was a long jagged scar that ran across his face; what teeth he had were yellow and rotten; his eyes popped and he drooled most of the time. The description Jem gives is one that you are more likely to find in a 1980's horror movie than in a small town in the 1930's. ...read more.

On the way home the two of them are attacked by Bob Ewell who has a vendetta against Atticus. Jem shows that he sees himself old enough to fight to protect Scout but is badly whilst Scout, who is still in her costume, is knocked to the floor and unable to get up or see anything, but she does sense a fourth person on the scene and can here a struggle between the mystery person and Bob Ewell. Not long later she wakes up in her house and finds Jem in bed badly hurt. Outside Atticus and Heck Tate (the sheriff) are talking Scout wanders out to find out what had happened and discovers that it was Boo Radley that had saved them. Scout finally gets her chance to meet him and see who he really is and what he's really like. Throughout the Novel Jem and Scout learn a lot about judging people and seeing things through other peoples eyes. Jem can do this a lot better because he is much Scouts senior but Scout to learns a lot about judging people without knowing them but also learns that adults are not always what they seem on the outside. Dill however does not learn has much from his experiences because he is around during certain crucial events but he does learn a lot about prejudice and the consequences of peoples actions. Page 1 of 6 ...read more.