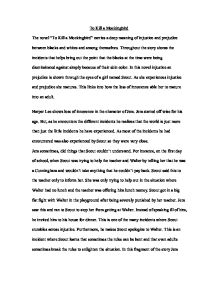 To Kill a Mockingbird - review

To Kill a Mockingbird The novel "To Kill a Mockingbird" carries a deep meaning of injustice and prejudice between blacks and whites and among themselves. Throughout the story shows the incidents that helps bring out the point that the blacks at the time were being discriminated against simply because of their skin color. In this novel injustice an prejudice is shown through the eyes of a girl named Scout. As she experiences injustice and prejudice she matures. This links into how the loss of innocence able her to mature into an adult. Harper Lee shows loss of innocence in the character of Jem. Jem started off wise for his age. But, as he encounters the different incidents he realizes that the world is just more than just the little incidents he have experienced. As most of the incidents he had encountered was also experienced by Scout so they were very close. Jem sometimes, did things that Scout couldn't understand. For instance, on the first day of school, when Scout was trying to help the teacher and Walter by telling her that he was a Cunningham and wouldn't take anything that he couldn't pay back. ...read more.

Instead of being immature to join in the fight, separates them and tells Scout to apologize. The incident on the first day of school shows the mature side of Jem and also the injustice Scout encounters on the first day of school connects with the injustice theme. Lee has also shown injustice in court case of Tom Robinson. Tom Robinson was accused of raping a white woman. This was a case that Atticus was to lose. However, he leaves that thought behind and tries his best to get Tom the best result possible. When Scout hears about the case, she asks why he was defending him even though the result was so definite. This is another point where Scout surpasses injustice. She knows very well that Tom was not guilty for this case. She somehow believed that the good will win in the end no matter what. In the case, it was one-sided and it was so clear that Tom would be found guilty. ...read more.

But as they experience the events colours start to appear. This makes them consider whether or not they are making the right decision under the circumstances. This is when Scout finds out that when you make a decision it is more than just considering if it is right or wrong. This is a signal which shows loss of innocence. Atticus has proven this to them by an example. This was when the children found out that their father was the best shooter in Maycomb. This made the children very proud as they thought of him as an old man and was ashamed of having such an old father. When they learn this truth, the children were boasting to the other children in school. However, Atticus made a stop to this by saying that people must consider what they are saying before they say it out loud. When the children finally understood the meaning of this they showed a much mature side of themselves and let their child-like attitude behind. To conclude, the loss of innocence is shown through the character of Jem, the Tom Robinson case and by the decisions they make. ...read more.