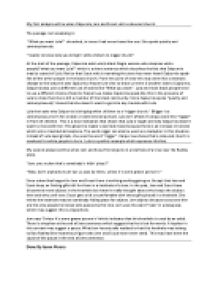 To Kill A Mockingbird (short analysis of quotes)

﻿My First analysis will be when Calpurnia, Jem and Scout visit a coloured church. ________________ The passage I am analysing is: ?What you want Lula?? she asked, in tones I had never heard her use. She spoke quietly and contemptuously. ?I wants to know why you bringin? white chillum to nigger church? At the start of the passage, Calpurnia asks Lula (a black Negro woman who despises white people)?what you want Lula?? which is a short sentence which describes the fact that Calpurnia may be scared of Lula. Notice that Scout who is narrating the story has never heard Calpurnia speak like all the other people in the black church. From her point of view this may seem like a dramatic change to the way she sees Caplurnia. ...read more.

Lula then asks why Calpurnia is bringing white children to a ?nigger church.? (Nigger is a contemptuous term for a black or dark skinned person). Lula isn?t afraid of using a word like ?nigger? in front of children. This is a clear indication that shows that Lula is tough and why Calpurnia doesn?t want to mess with her. This gives the reader a worried mood because there is an increase in tension which sets a troubled atmosphere. The word nigger can also be used as a metaphor in this situation. Instead of Lula saying black, she uses the word ?nigger?. Harper Lee shows that a coloured church is nowhere for white people to be in. ...read more.

Scout gets a bit uncomfortable with these gifts placed in a knothole. She thinks the knothole may be somebody hiding place for objects. Jem objects because scout and him are the only people he knows who passes by this tree. Jem uses the word ?naw? in a slang way which may suggest this is a hyperbole. Jem says ?Unless it?s some grown person?s-?which indicates that this knothole is used by an adult. There is a hyphen at the end of Jems sentence which suggest that he is lost for words. A hyphen in this context may suggest a pause. What Jem has actually realised is that this knothole may belong to Boo Radley (the mysterious figure who Jem and Scout have never seen). This may have been the cause of the pause in the end of Jems sentence. ________________ Done By Jason Perera ...read more.