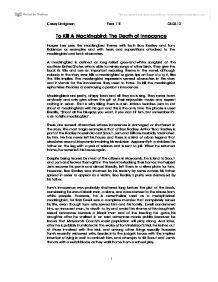 To Kill a Mockingbird - The Death of Innocence. There are several characters whose innocence is damaged or shattered in the story. The most tragic example is that of Boo Radley.

To Kill A Mockingbird: The Death of Innocence Harper Lee uses the mockingbird theme with both Boo Radley and Tom Robinson as examples and with fears and superstitions attacked to the mockingbird and both characters. A mockingbird is defined as long-tailed grey-and-white songbird of the southern United States who is able to mimic songs of other birds. They give the book its title and are an important recurring theme in the novel, although nobody in the story ever kills a mockingbird or gives tips on how do to it, like the title implies. The mockingbird represents several characters in the story and it stands for the innocence they used to have. To kill the mockingbird epitomizes the idea of destroying a person's innocence. Mockingbirds are pretty, chirpy birds and all they do is sing. They never harm anybody and only give others the gift of their enjoyable music and expect nothing in return. That is why killing them is a sin. Atticus teaches Jem to not shoot at mockingbirds with his gun and this is the only time the phrase is used literally, 'Shoot all the bluejays you want, if you can hit 'em, but remember it's a sin to kill a mockingbird'. ...read more.

Boo Radley's purity was destroyed by his father. Tom's innocence was probably shattered long before the plot of the book, considering he was a black man, a slave, and accustomed to the abuse from white people. However, he is nevertheless used as a metaphorical mockingbird, for Bob Ewell was a complete monster that completely ruined his life, even though Tom only served him and his family. Ewell condemned him, an innocent man, to death to try and avoid the shame of his daughter's sexual advances towards a black man and of the beating he gave his daughter after he walked in on said advances made public because he knows that Maycomb County's racist population will play along. And later, after he is publicly humiliated in the wake of Tom Robinson's trial, he lashes out at those involved with the trial, and among other things sexually harasses Tom's recently widowed wife, breaks into the judge's house with the implied intention of lying in wait to ambush him, and attempts to slit Scout and Jem's throats with a switchblade as they walk home from a school play. ...read more.

In reality, he is simply jaded by the hypocrisy of white society and prefers living among blacks. Even among elder characters, the loss of innocence is an important subject. Boo Radley is the embodiment of the title of the book, for he was a gentle man who gave without expecting favors in return, and yet he was 'killed' by his father. For Jem, it marked his growth into adulthood by his recognition that the world was not as fair as he had always thought it had been. Mr. Raymond, although barely seen, is a perfect example of how the society can corrupt a person, to the point of destroying his faith in humanity, or his innocence. The innocence of Tom Robinson was not wrecked in the same way that it was for the other characters, and neither was it the same kind of innocence the other characters dealt with. The way Ewell continuously tried to convict a man who always served him and who was innocent of all the charges he was accused of is a clear example on how his innocence was also destroyed. Words: 910 Casey Lindgreen Year 11E 03.05.10 1 ...read more.