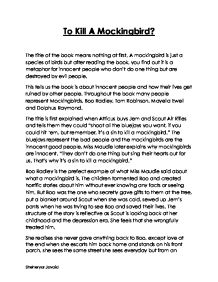 To kill a mockingbird - Title's Importance

To Kill A Mockingbird? The title of the book means nothing at first. A mockingbird is just a species of birds but after reading the book, you find out it is a metaphor for innocent people who don't do one thing but are destroyed by evil people. This tells us the book is about innocent people and how their lives get ruined by other people. Throughout the book many people represent Mockingbirds, Boo Radley, Tom Robinson, Mayella Ewell and Dolphus Raymond. The title is first explained when Atticus buys Jem and Scout Air Rifles and tells them they could "shoot all the bluejays you want, if you could hit 'em, but remember, it's a sin to kill a mockingbird." The bluejays represent the bad people and the mockingbirds are the innocent good people. Miss Maudie later explains why mockingbirds are innocent. "They don't do one thing but sing their hearts out for us. ...read more.

She learns what a Mockingbird is, and that Boo represents one as she says that hurting Boo Radley would be like "shootin' a mockingbird." Tom Robinson is also a metaphoric mockingbird and Atticus shows this when he defends Tom at a case. During the trial, all of the evidence is strongly in Tom's favour and Atticus poured all of his heart out and did a great job, but he still loses the trial. The poorest white man wins with no proof except his word against a black mans. This shows that even though that Tom was proven innocent, he's black and will always be guilty. Tom, the mockingbird, hasn't done anything wrong besides being nice to a white girl. After his death, Mr. Underwood compares his death to "the senseless slaughter of songbirds." This is relating to the title of the book as mockingbirds just sing their hearts out for us. ...read more.

He pretends to be a drunk so people can accuse him of being a drunk and excuse his choice to marry a black woman. He prefers living with the blacks but if the town finds out, then he will be hated so this shows what a man has to do to be with blacks. Harper Lee wrote this book to make the world a better place with no racism and she has done so. Back 50 years people couldn't stand blacks but now a black man is running for presidency. This shows how far the world has come and this book is still loved to this day even though it was written at the 1960's. The jury would normally take a minute to say that Tom's guilty but it took them much longer so this shows they actually thought and looked at the evidence and Atticus says that it is a "baby step" and how the world is today, proves that it was. ?? ?? ?? ?? Sheheryar Javaid ...read more.