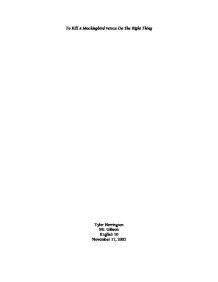 To Kill A Mockingbird versus Do The Right Thing

To Kill A Mockingbird versus Do The Right Thing Tyler Herrington Mr. Gibson English 10 November 17, 2002 To Kill A Mockingbird and Do The Right Thing, have some similarities, but at the same time are very different. The theme of racism is very prevalent in both the film and the book, the settings are similar but the fundamental difference was the differences between the main characters. To Kill A Mockingbird follows the lives of Scout and Jem, for three years. Scout, at the beginning of the story is six and Jem is nine. Scout and Jem are fascinated with Boo Radley, a character who supposedly attacked his father, and was shut up in the house for many years. Their father is Atticus, a man in his early 50's, his kids do not appreciate him, but after a big court trial, where Atticus defends the client, Tom Robinson, the kids realise that he has many qualities that most fathers do not. Atticus is a strong-hearted man who loves his children very much and is always trying to help people. ...read more.

White people run the society in both the film and book. For example, in To Do The Right Thing, Sal, a middle aged, white man, owns a pizzeria, whereas the black people are either unemployed, or have low paying jobs, like Mookie. Mookie, who works as a deliveryman for Sal's pizzeria, does not get nearly as much money as Sal does. In To Kill A Mockingbird, Atticus, Scout and Jem's father, is a lawyer, where as Calpurnia, his surrogate wife and his family's cook, gets treated well but does not get as nearly as much money as Atticus. Atticus, like many other lawyers, is a highly educated man, and with a good education, you can make a good salary. Black people could not get the same education as the white people, they were not allowed. Without a good education, you cannot get a well paying job. Due to the fact that Calpurnia could not get as much education as Atticus, she could not get a very good job. The settings of To Kill A Mockingbird and Do The Right Thing are similar for the following reasons. ...read more.

Learning by experience is always a harder way to learn things, because you are the one who suffers when you make the mistake. If someone else has already made the mistake, they can tell you that it is a bad idea to do the same thing they did; Mookie did not have this opportunity, he had to learn things by himself. To Kill A Mockingbird and Do The Right Thing have some similarities, but at the same time are very different stories. For example, Mookie and Scout were very different characters and lived very different lifestyles; Scout was lucky she had a caring father that she could use as a role model, where as Mookie was not so lucky, he had no role model to look up to and had to learn from experience. "If your father's anything, he's civilized at heart"(pg.98). On the other hand, the theme of racism was a very big part of both stories. Without the racism, the court case would not have happened in To Kill A Mockingbird, and the big conflict at the end of Do The Right Thing would not have taken place. The stories would have been different stories if there was not a theme of racism. ...read more.