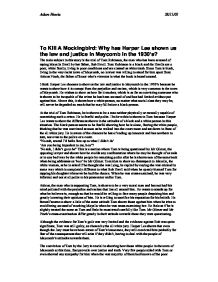 To Kill A Mockingbird: Why has Harper Lee shown us the law and justice in Maycomb in the 1930&amp;#146;s?

To Kill A Mockingbird: Why has Harper Lee shown us the law and justice in Maycomb in the 1930's? The main subject in this story is the trial of Tom Robinson, the man who has been accused of raping Mayella Ewell by her father, Bob Ewell. Tom Robinson is a black and the Ewells are a poor, white family, living in poor conditions and are classed as white trash. Since Tom is black, living in the very racist town of Maycomb, no lawyer was willing to stand for him apart from Atticus Finch, the father of Scout who's viewoint is what the book is based around. I think Harper Lee chooses to show us the law and justice in Maycomb in the 1930's because he wants to show how it is corrupt from the prejudice and racism, which is very common in the town of Maycomb. He wishes to show us how far it reaches, which is as far as convicting someone who is shown to be incapable of the crime he has been accused of and has had limited evidnce put against him. ...read more.

"No suh, scared I'd hafta face up to what I didn't do' 'Are you being impudent to me, boy'? 'No suh, I didn't go to be" This is a section where Tom is being questioned by Mr Gilmer, the opposing lawyer and shows how he avoids any confrontation where he may be thought of as rude or in any bad way by the white people by remaining polite after he is shown non of the same back when being addresses as 'boy' by Mr Gilmer. Tom tries to show no dissrespect to Mayella, the white woman, as he is asked if he thought she was lying, he replied by saying she was mislead in some way which is completely different to what Bob Ewell said when he openly blamed Tom for rapping his daughter whenever he had the chance. When he was cross-examined, he was very informal and not at all polite to his prosecutor unlike Tom. ...read more.

Harper Lee shows that even though the Jury must have been aware of Tom's innocence, they still convicted him probably for fear of the consequences that will arise if they didn't, having to deal with the people of Maycomb's attitudes towards them. The conviction of Tom by the Jury is crucial in showing how those white people in the town of Maycomb at this time, fear provails over justice and truth. Very few people sided with Tom or even showed any sympathy for him when the vast majority of them had known of the poor evidence against Tom and probably thought that he was innocent. But, again, the fear within the white people caused them to convict the wrong person. That and the racism that would obviously go against Tom but both him and Bob are alomost socialy equal and are shown the same low amount of respect, which may have helped Tom in his court case but it wasn't enough to hide the fact that Bob is white, and Tom is black. Adam Howie 28/11/01 ...read more.