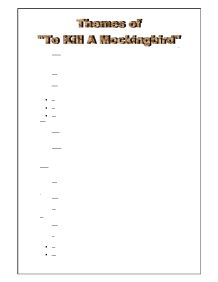 By Rishi Kathuria There are many themes that are explored in this novel of "To Kill A Mockingbird". Harper Lee puts these themes to good use throughout the book, which gives the reader a good sense of what is going on in the novel. There are ten main themes explored throughout this novel, and Harper Lee uses these themes to describe the different events that take place during the novel. The first theme that is explored in this novel is the theme of "courage". It is explored throughout the novel, but it's main impact, is in part one of the novel, and also in some parts of part two. It is used in several chapters. Firstly, there is the courage shown by the children, Jem, Scout and Dill. They all have their childish fears of the "Radley Place", and in the chapters one, two and six, they show their signs of fearlessness. Here are some examples: * Jem takes on Dill's dare to touch the Radley place, even though they believed a "maleviolent phantom" lived there. * On the night that Jem loses his pants on the Radley fence, he finds the courage to return later, to retrieve them. ...read more.

The fact that they obey her is a sign that they accept her as a sign of authority. * When Calpurnia sends Scout in the kitchen for insulting Walter's table manners, she tells Scout that Walter is their guest. Scout is made to be ashamed. * When Atticus defends Calpurnia, he tells Alexandra "She tried to bring them up according to her lights, and Cal's lights are pretty good." This indicates that she has the same ideas about what is right and wrong as Atticus has. It is from Miss Maudie that the children learn how to react to circumstances that are so upsetting. Miss Maudie teaches the children about what is good and what is evil. * She gives Scout attention, when Jem chooses Dill as his companion. Scout is taught about the issues in the community. * She talks to the children about Boo: "His name's Arthur, and he is alive." * She changes their attitudes towards their father - Atticus does not boast about his shooting ability. * She gets through her house burning down. (A time of difficulty) Prejudice Prejudice is an attitude towards someone or something, based on an opinion formed beforehand. ...read more.

These differences can easily be contrasted in a table: Macomb Ladies' comments Revealed through Scout Cooks and farmhands are sulky after the trial Atticus's kitchen is full of gifts from the Negro community One will dismiss her servant if she doesn't cheer up Calpurnia speaks of how Tom suffers being shut up in prison Someone must help that "darky's wife" become a Christian Black church has collection in support of the family while Tom is in jail. "There's no lady safe in her bed these nights" Tom feels sorry for Mayella's loneliness, and greets her as he passes You cannot educate them Calpurnia has taught her son and Scout how to read and write "Typical of a nigger to have no thought for the future" "Helen can't leave those children to work while Tom's in jail... nobody leaves here till we have ten dollars". Rev Sykes words to his congregation "The veneer of civilisation's mighty thin" In the courthouse, four Negros give up their seats for Jem Scout and Dill From all these themes, we learn to take in to account other people's point of view. This is taught to Scout all through the novel, through Atticus, and soon, she understands the key to equality. Rishi Kathuria, 10 set 2 ...read more.